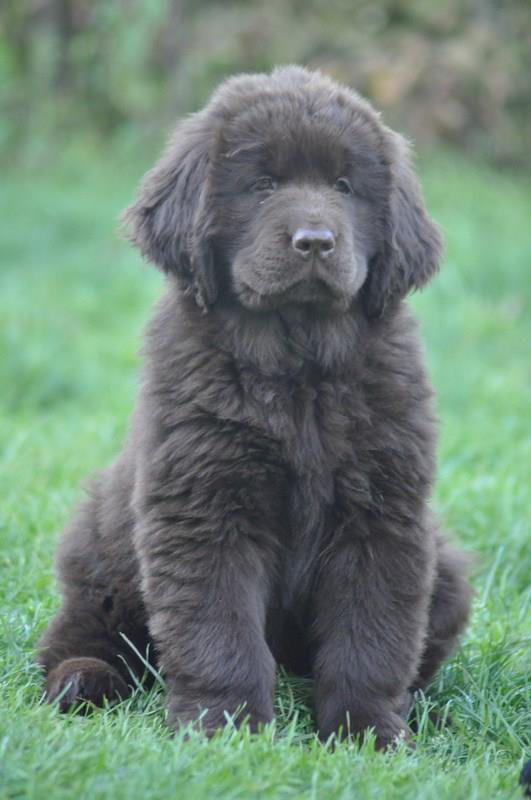 The Newfoundland shares many traits with other Mastiffs, such as the St. Bernard and English Mastiff, including stout legs, massive heads with very broad snouts, a thick bull neck, and a very sturdy bone structure. In fact, many St. Bernard Dogs have Newfoundland Dog ancestry. Newfoundlands were brought and introduced to the St. Bernard breed in the 18th century when the population was threatened by an epidemic of distemper. They share many characteristics of many mountain dog breeds such as the Great Pyrenees. The Newfoundland breed originated in Newfoundland, and is descended from a breed indigenous to the island known as the lesser Newfoundland, or St. John's dog. The Mastiff characteristics of the Newfoundland are likely a result of breeding with Portuguese Mastiffs brought to the island by Portuguese fishermen beginning in the 16th century.

The speculation that Newfoundlands may be partly descended from big black bear dogs introduced by the Vikings in 1001 A.D. is based more in romance than in fact. By the time colonization was permitted in Newfoundland in 1610, the distinct physical characteristics and mental attributes had been established in the Newfoundland breed. In the early 1880s, fishermen and explorers from Ireland and England traveled to the Grand Banks of Newfoundland, where they described two main types of working dog. The breed's working role was varied. Another famous all black Newfoundland performed as the star attraction in Van Hare's Magic Circus from 1862 and for many years thereafter in one of England's founding circus acts, traveling throughout Europe.

The breed prospered in the United Kingdom, until 1914 and again in 1939, when its numbers were almost fatally depleted by wartime restrictions. Since the 1950s there has been a steady increase in numbers and popularity, despite the fact that the Newfoundland's great size and fondness for mud and water makes it unsuitable as a pet for many households.

William Withering, famous for his book on the use of Dropsy published in 1785, lived at Edgbaston Hall, Birmingham between 1786 and 1799. While there, he bred Newfoundland Dogs. There is very little else on his experiments with these dogs. His daughter Charlotte married a Beriah Botfield and they had a painting in Norton Hall by Samuel Cox of Daventry painted about 1830-1840 called "Portrait of Lion, a Newfoundland Dog, and Juba, a Pug Dog of Mrs. Botfield's. This hung in the north front of Norton Hall. This painting would have been made around the same time that Landseer painted his portrait of Lion, the Newfoundland Dog. (See 'Catalogue of Pictures in the possession of Beriah Botfield esq.at Norton Hall' published in London in 1848.

According to the AKC Standard, "Sweetness of temperament is the hallmark of the Newfoundland." This is a vibrant breed who adores being around people, and wants to be included in all aspects of family life. Newfoundlands are best served by active people who love being outdoors, as these dogs are at their happiest when engaged in activity with a purpose. They get along fabulously with children, remaining patient when kids want to climb all over them, whether at play, or simply to snuggle up to relax in the evening. Perhaps the most famous Newfoundland was Nana, the dog from Peter Pan, who watched over the Darling children. Most owners agree that the characterization the Newfoundland as a natural babysitter who looks out for the well-being of her charges was right on the money.

The Newfoundland doesn't need much time to run, but they do need lots of daily walks, and if possible they should wear a weighted backpack or have something to pull. This helps expend maximum energy, and also makes the dog feel like he has a purpose. Two of the Newfoundland's favorite things to do are play in the snow (pulling kids on a sled can occupy him for hours), and swim. A Newfoundland who is not properly exercised is a handful. This breed experiences an extended puppyhood, and they are very bouncy. Having a full-grown, rambunctious Newfoundland can mean household objects and people could to flying across the room. People who love the outdoors will get along wonderfully with this breed. They are excellent camping buddies, will accompany you on hikes and can even make themselves useful by carrying some of your gear and acting as a guard dog while you sleep. Though they don't need daily runs to maintain health, Newfoundland are good joggers and can keep up with you on bike rides, as well. This breed is far too large to live comfortably in an apartment or condominium. Large houses with yards or farms are much more suitable locations for a Newfoundland.

Training a Newfoundland can vary from easy to difficult, depending upon the individual dog, but once they get the hang of it, there isn't much this breed can't learn. The best way to keep training on the easy side is to start them off young. They respond best to lots of excited praise and treats, as even a stubborn Newfie possesses the desire to please. Treating a Newfoundland harshly will cause him to become mistrustful of you, so it's best to stay away from discipline, and stick to reinforcing good behavior. Newfoundlands were originally used on fishing boats where they hauled equipment and were tasked with saving those who fell overboard. Today, they are still used as water rescue dogs and will instinctively jump into water after a person in peril.

Newfoundlands can develop severe separation anxiety. They adore people and become anxious and depressed when left alone for long periods of time, which they express by chewing destructively. While proper exercise can help minimize anxiety, it is best that they not live with people who have hectic work schedules, and families with a stay at home parent are the ideal. Newfies experience an extended puppyhood and are very bouncy and rambunctious. While they are excellent with children, they aren't recommended for homes with toddlers. An excited Newfoundland is a bull in a china shop, bouncing here and there, sending things flying around the room, which can include people. A small child could get hurt by a well-intentioned Newfie.

Taking care of the Newfoundland coat can be quite time consuming. The fluffy coat is a dirt and debris magnet and needs to be brushed daily in order to stay clean and prevent tangles and mats from forming in the hair. When properly brushed, baths are only required every one to two months. Newfoundlands are moderate shedders, though they shed heavily twice a year, in Spring and Fall. The ears should be checked on a regular basis for signs of wax buildup, irritation or infection. Clean them with a cotton ball and a veterinarian-approved cleanser; never use a cotton swab in a dog's ear canal. Teeth should be brushed on a weekly basis to prevent tartar buildup, promote gum health and keep bad breath at bay. Trim nails monthly if the Newfoundland does not wear the toenails down naturally outdoors.