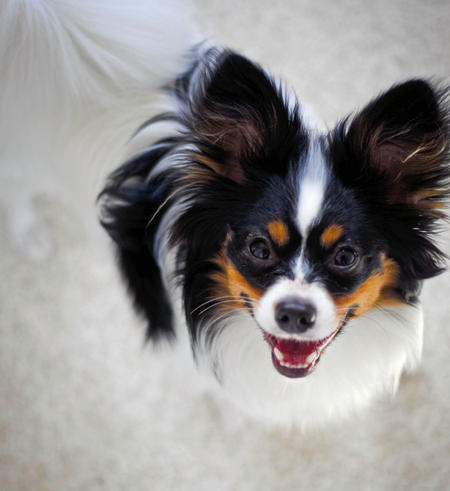 The history of the Papillon is traced through works of art. The earliest toy spaniels resembling the papillon are found in Italy. Tiziano Vicelli painted these small dogs in many famous paintings beginning around 1500, including the Venus of Urbino (1542). Other well-known artists who included them in paintings are Watteau, Gonzales Coques, Fragonard, Paolo Veronese, and Mignard. In a painting after Largillierre in the Wallace Collection in London, a Papillon is clearly shown in a family portrait of Louis XIV. Papillons are also in paintings of royal families around Europe and paintings of merchant-class families. The breed was popular in England, France, and Belgium, which are considered countries of origin by the FCI.

The "Titian spaniels" and those portrayed by later artists through Mignard and his contemporaries had the drooping ears characteristic of today's Phalène; the erect-eared appearance did not become fashionable until the end of the 19th century. The Titian spaniels were also exclusively red-and-white in coloration, in contrast to the many recognized colorations of today's Papillon.

The Papillon's history and long association with royalty have led to many stories about the breed. Marie Antoinette is said to have walked to the guillotine clutching her small dog under her arm, likely an apocryphal tale. However, tradition has it that Marie Antoinette's dog was a small spaniel that had been brought to the French court from Spain on the back of pack mules. According to the story, her pup was spared and cared for in a building in Paris still called the Papillon House. Marie Antoinette's dog was said to have descended from a very old drop-eared breed known as the Epagneul Nain, or Continental Dwarf/Toy Spaniel that appeared in church frescos and paintings as early as the 13th century.

The Papillon is still officially referred to as the Epagneul Nain (ENC) in non-English-speaking countries. The name Squirrel Spaniel also has been used, most likely referring to an earlier standard in which the tail set is described as "curling over the back as a squirrel's". One version of the history of the two varieties of ear shape in the ENC ("papillon" to denote the erect ear and "phalène" to denote the dropped ear) is that toward the end of the 19th century, breed fanciers bred a version of the spaniel whose ears stood up. This dog was said to have been nicknamed papillon based on the impressively large, erect ears that resembled the wings of a butterfly. The drop-eared variety of the breed came to be called the Phalène (which means "night moth"). Both types are still bred today and appear in the same litter. The papillon variety is much more common, although recently, the Phalène has undergone a resurgence in popularity.

The Papillon was first recognized by the AKC in 1935 with the formation of the Papillon Club of America. By the end of the war, the club was no longer functioning, but it was reactivated in 1948, with its first postwar specialty held in September 1954. In 1999, Ch. Loteki Supernatural Being (call name "Kirby") owned and handled by John Oulton of Norwalk, Connecticut, became the first Papillon to win the prestigious "Best in Show" at the annual Westminster Kennel Club dog show. Kirby also won international success for the breed by taking the World Dog Show in Helsinki, Finland, and the Royal Invitational in Canada in 1998. Papillons also enjoy success today in competitive fields outside of conformation, including obedience and agility.

The Papillon is a small, friendly, elegant toy dog of fine-boned structure, light, dainty and of lively action; distinguished from other breeds by its beautiful butterfly-like ears.

Papillons have only minor health concerns, although patellar luxation, seizures, and dental problems can be issues. Additionally, they can be at risk for progressive retinal atrophy, intervertebral disk disease, and allergies.

The name “Papillon” is french for “butterfly” and this breed got that name from their butterfly shaped ears. Papillons are spirited little dogs with energy to spare. They love to chase balls and run around the house, though they are happy to take a break to soak up a little love and attention whenever they can get it. They learn things quickly, and are often at the top of their class in obedience and agility. Papillons make excellent family dogs, in that they can keep up with kids who want to play, but know when it's time to relax for a belly rub and a nap. They make excellent companion animals for first time dog owners.

Papillons are tiny, but they have lots of energy. Though they can entertain themselves by running around the house for hours, they should be allowed to play outdoors whenever possible. They also appreciate daily walks, and are very easy to leash train. Their size makes them ideal apartment dogs, though they can be just as happy in a home with wide open spaces. Papillons are smart and need to exercise their minds as well as their bodies. Playing interactive games with them is a welcome activity, as is agility training. They will soak up the added time with you, and will excel on the obstacle course, as they think quickly on their feet.

Papillons are highly trainable dogs. They possess a strong desire to please and are highly intelligent, often picking up on commands in one lesson. Some can be a little rebellious, so don't think your dog is defective if he's a little rebellious. Food motivates them to do just about anything, and positive reinforcement should always be the method of choice for training sessions. Once basic obedience has been mastered, many people enroll their Papillons in advanced training with the goal of entering their dog in competitions. This breed is often the grand champion of the toy group in agility and competitive obedience.

Because Papillons love people so much, Separation Anxiety can develop fairly easily. They do not like to be left alone for long periods of time and will bark excessively or break their house training rules if they get too anxious. Papillons are best served by people who work flexible hours, families with a stay at home parent, or active retirees. Like other toy breeds, Papillons are barkers. They will bark to let you know that someone is coming to the door, someone walked by the door, or someone two houses down opened a door. This makes them excellent watchdogs, but can try your patience and kill your eardrums. Teaching your Papillon commands to stop barking is a must at an early age.

Papillons fairly are low maintenance when it comes to grooming, despite the high-maintenance look of their coat. They do not emit a dog odor, and when brushed two to three times per week, they only need to be bathed as needed. The coat is not prone to mats, but brushing helps to distribute the natural oils of the skin and keep the coat shiny and healthy. They need to be trimmed occasionally, but it can be done at home and hiring a professional groomer is not a necessity. The Papillon's ears should be checked on a regular basis for signs of wax buildup, irritation or infection. Clean them with a cotton ball and a veterinarian-approved cleanser; never use a cotton swab in a dog's ear canal. Teeth should be brushed on a weekly basis to prevent tartar buildup, promote gum health and keep bad breath at bay. Trim nails monthly if the dog does not wear the toenails down naturally outdoors.