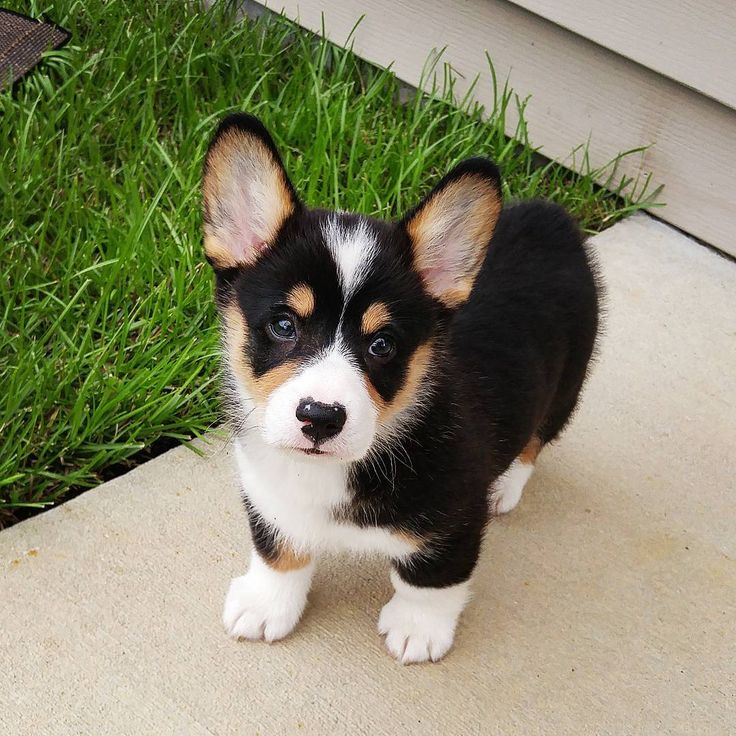 The Pembroke Welsh Corgi lineage has been traced back as far as 1107 AD. It is said that the Vikings and Flemish weavers brought the dogs with them as they traveled to reside in Wales. As far back as the 10th century, corgis were herding sheep, geese, ducks, horses, and cattle as one of the oldest herding breed of dogs.

Pembroke Welsh Corgis are closely related to Schipperkes, Keeshonds, Pomeranians, Samoyeds, Chow Chows, Norwegian Elkhounds, and Finnish Spitz. Pembrokes and Cardigans first appeared together in 1925 when they were shown under the rules of The Kennel Club in Britain. The Corgi Club was founded in December 1925 in Carmarthen, Carmarthenshire. It is reported that the local members favored the Pembroke breed, so a club for Cardigan enthusiasts was founded a year or so later. Both groups have worked hard to ensure the appearance and type of breed are standardized through careful selective breeding. Pembrokes and Cardigans were officially recognized by the Kennel Club in 1928 and were initially categorized together under the single heading of Welsh Corgis, before the two breeds were recognized as separate and distinct in 1934.

Pembroke Welsh Corgis are becoming more popular in the United States and rank 20th (24th) in American Kennel Club registrations, as of 2015 (2012). However, corgis are now listed as a "vulnerable" breed in the United Kingdom; the decline has been said to be due to a 2007 ban on tail-docking (the practice of cutting off the animal’s tail) in the U.K., as well as the lack of breeders in the U.K.

Pembroke Welsh Corgi is a Low-set, strong, sturdily built and active, giving an impression of substance and stamina in a small space. Should not be so low and heavy-boned as to appear coarse or overdone, nor so light-boned as to appear racy. Outlook bold, but kindly. Expression intelligent and interested. Never shy nor vicious.

Pembrokes have an average life expectancy of 12–14 years. Pembroke Welsh Corgis are achondroplastic, meaning they are a "true dwarf" breed. As such, their stature and build can lead to certain non-inherited health conditions, but genetic issues should also be considered. Commonly, Pembrokes can suffer from monorchidism, Von Willebrand's disease, hip dysplasia, degenerative myelopathy (DM), and inherited eye problems such as progressive retinal atrophy. Genetic testing is available for Pembroke Welsh Corgis to avoid these issues and enhance the genetic health pool. Pembrokes are also prone to obesity given a robust appetite, characteristic of herding group breeds.

The Pembroke Welsh Corgis my be small, but they pack a lot of dog into a little body. Originally used to herd cattle and hunt rodents in Pembrokeshire, Wales; Corgis were sturdy herding dogs who took their jobs seriously. They would nip the heels of the cattle to keep them in line, and their small bodies enabled them to avoid being kicked. Today, the Corgi is still used on farms and ranches, but is also an energetic family companion. They are good with other pets, make reliable watchdogs, and are trustworthy around children. Corgis have a mind of their own but still have a desire to please people. They pack a large personality, which varies from clownish and attention seeking, to thoughtful and introspective.

Despite their high energy level, Pembroke Welsh Corgis only need a moderate amount of exercise to maintain health and happiness. They are adaptable, and can happily dwell on a ranch, in a home with a yard, in an apartment or condominium. They should be walked daily, and if they don't have a yard to play in at home, should be allowed to run in a park at least once a week. Despite their need for moderate exercise, Corgis need a lot of mental stimulation. As with other breeds who have roots as farm dogs, they like to stay busy. They excel in agility training and advanced obedience. If not properly exercised physically and mentally, Corgis can become anxious and destructive when left alone.

Pembroke Corgis are strong willed – they like to be in charge and will resist a hard-nosed trainer. They prefer to do things on their own time, so a lot of patience is required when training this breed. Positive reinforcement and lots of treats will ensure a responsive Pembroke. Once consistent leadership is established, Corgis take well to training and enjoy learning new tasks. After beginning obedience training is complete, Corgis should graduate to advanced training and if possible, involved in tracking and agility classes. This is one “old dog” that likes to learn new tricks, and training should continue throughout their lives.

Pembrokes, like other farm dogs, are excellent watchdogs. They sound the alarm that uninvited people or animals are on the horizon, which can get out of hand if not nipped in the bud at an early age. Proper socialization is important, so that the Pembroke Welsh Corgi doesn't become mistrustful of all strangers. They will also bark if left alone for long periods of time, so apartment and condo dwellers should take this into consideration before adopting a Corgi. While they get along fine with children, Corgis can exhibit dominance over small children, and they have been known to attempt to herd groups of kids. Because their herding behavior involves the nipping of heels, playtime should always be supervised.

Pembroke Welsh Corgis are easy to groom. Their medium-length coat only requires a weekly brushing to remove loose and dead hair. Twice a year the Pembroke will shed heavily, and brushing may need to occur several times per week. Frequently bathing a Pembroke will cause the natural weatherproof oils in the hair to break down, so it is important to only bath a Corgi as-needed. They are naturally clean dogs, so most owners typically only need to bathe their dogs once every three or four months. The Corgi's ears should be checked on a regular basis for signs of wax buildup, irritation or infection. Clean them with a cotton ball and a veterinarian-approved cleanser; never use a cotton swab in a dog's ear canal. Teeth should be brushed on a weekly basis to prevent tartar buildup, promote gum health and keep bad breath at bay. Trim nails monthly if the dog does not wear the toenails down naturally outdoors.