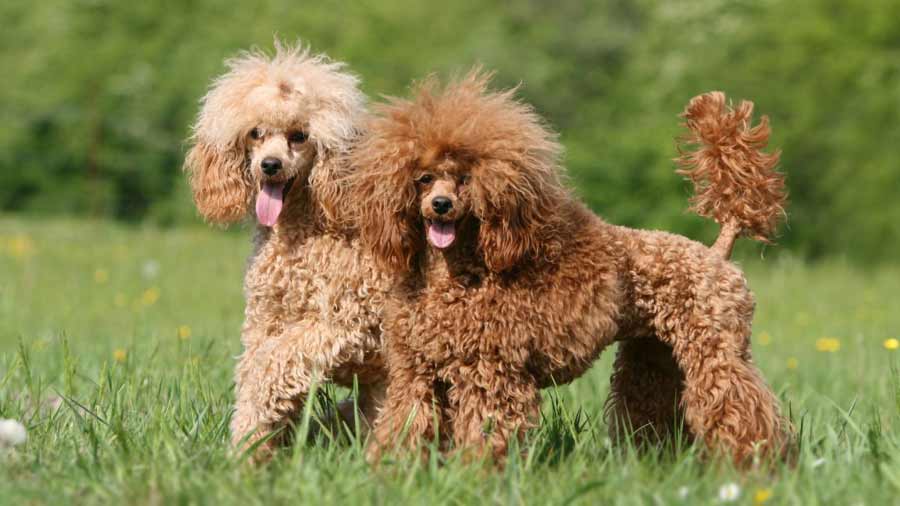 The origin of the poodle is disputed. Encyclopædia Britannica traces the origin of the poodle in Germany where it was known as the Pudelhund. The word Pudel is derived from the Low German verb meaning "to splash about", and the word Hund (dog). The FCI holds that the poodles descends from the French dog Barbet and might have been crossed with the Hungarian water dog. When the breed was officially recognised by the FCI, in order to avoid any possible dispute between two founding members, Germany officially recognised the Poodle as a dog originating from France. The French name Caniche comes from the word cane (the female of the duck) since this type of breed was used as a water retriever mainly for duck hunting thanks to its swimming ability. Due to the breed's popularity in France, it became established as a national breed.

The European mainland had known the poodle long before it was brought to England. Drawings by German artist Albrecht Dürer established the popular image of the breed in the 15th and 16th centuries. It was the principal pet dog of the late 18th century in Spain, as shown by the paintings of the Spanish artist Francisco Goya. France had toy poodles as pampered favorites during the reign of Louis XVI at about the same period. The poodle has contributed to many other dog breeds, such as the Miniature Schnauzer, Standard Schnauzer, and dogs of the Bichon type in order to either save those breeds from extinction, reduce size, or by dog fanciers to improve their appearance.

That of a very active, intelligent and elegant-appearing dog, squarely built, well proportioned, moving soundly and carrying himself proudly. Properly clipped in the traditional fashion and carefully groomed, the Poodle has about him an air of distinction and dignity peculiar to himself.

The most common serious health issues of Standard Poodles listed in order of the number of reported cases in the Poodle Health Registry (20 August 2007) are Addison's disease, gastric dilatation volvulus, thyroid issues (hyperthyroid and hypothyroid), tracheal collapse, epilepsy, sebaceous adenitis, juvenile renal disease, hip dysplasia, and cancer. Standard Poodles are also susceptible to some health issues usually too minor to report to the health registry. The most common of these minor issues is probably ear infection. Ear infections are a problem in all poodle varieties because their nonshedding coat grows into the ear canal, where it traps wax and dirt. Ear problems can be minimized by proper ear care, including regular cleaning and plucking of hair within the ear canal. A veterinarian should be consulted if the dog shows signs of an ear infection.

Addison's disease. Addison's disease is (as of 20 August 2007) the illness most commonly reported to the Poodle Health Registry. The number of reported cases is nearly twice as high as the next most common problem (GDV). Addison's disease is characterized by insufficient production of glucocorticoid and/or mineralocortoid in the adrenal cortex (near the kidneys). Addison's is often undiagnosed because early symptoms are vague and easily mistaken for other conditions. Standard Poodles with unexplained lethargy, frequent gastric disturbances, or an inability to tolerate stress should be tested for it. Addison's can cause fatal sodium/potassium imbalances, but if caught early and treated with lifelong medication, most dogs can live a relatively normal life.

Gastric dilatation volvulus. There is a high incidence of gastric dilatation volvulus (GDV) in this breed, which occurs when twisting of the stomach (volvulus or torsion) causes or is caused by excess gas. Symptoms include restlessness, inability to get comfortable, pacing, or retching without being able to bring up anything. The dog's abdomen may be visibly swollen, but bloat or torsion can occur without visible swelling. A dog with GDV requires immediate veterinary care. The dog's survival usually depends on whether the owner can get to a veterinarian in time. GDV risk is increased with faster eating and a raised feeding bowl.

Poodles have a reputation for being “sissies.” They way their hair is cut for shows probably doesn't help that image, but Poodles are by no means fragile, shrinking violets. They are outgoing, friendly dogs who love to run and romp, and interestingly, they were originally used to assist hunters of water fowl. They are true family dogs who can play hard with children all afternoon, then curl up in the living room for an evening of relaxation. Poodles make excellent watchdogs, they are alert and curious and will sound the alarm that a person or animal is approaching. They make an excellent choice for families of all sizes and ages, and are great for first time dog owners.

Standard Poodles are large dogs who need lots of room to move, both indoors and out. They are well-behaved inside, which can make them attractive for people who live in cities or in condominiums, but unless a commitment is made to exercising your Poodle, these may not be the best environments. Daily walks and the chance to run can keep your Standard Poodle happy and healthy. They are a smart breed who need to use their minds as much as their bodies, so it is important to give your Poodle lots of interesting activities to do during the day, and you should consider enrolling your Poodle in agility activities where they can use both mind and body at the same time.

Poodles are highly trainable dogs. They catch on very quickly to patterns and don't require much motivation beyond praise and a couple of treats. Poodles should never be treated harshly as they will simply stop listening to you. They are natural learners, however, so they shouldn't test your patience too far during training sessions. Once basic obedience has been mastered, Poodles should graduate on to advanced obedience, trick training, or the agility course. They are thinking dogs and will appreciate the opportunity to learn new things.

The biggest mistake Standard Poodle owners is not exercising them enough. The breed's reputation for being dainty leads novice owners to believe these dogs don't require vigorous activity, but they need to run daily. Poodles who don't get enough exercise can be anxious or destructive. Poodles are sensitive dogs who like to live in peaceful environments. If your house is full of chaos, it can cause your Poodle unnecessary stress. Though they are good with kids, they often don't do well in homes with lots of children where there may be a great deal of yelling and tension.

Standard show Poodles are allowed a few distinct grooming styles, including puppy, English saddle and Continental, but household Poodles can be clipped, trimmed or shaved in just about any style imaginable. Regardless of the style, a Poodle needs to be brushed regularly. While they do not shed, the hair grows constantly, so loose hair and tangles need to be prevented and removed so that mats do not form. Bathing and trimming is required every three weeks. Many owners prefer to use the services of a professional groomer, while others learn to use the clippers themselves, in order to save money. Check the ears on a regular basis for signs of wax buildup, irritation or infection. Clean the ears with a cotton ball and a veterinarian-approved cleanser; never use a cotton swab in a dog's ear canal. Teeth should be brushed on a weekly basis to prevent tartar buildup, promote gum health and keep bad breath at bay. Trim nails monthly if the dog does not wear the toenails down naturally outdoors.