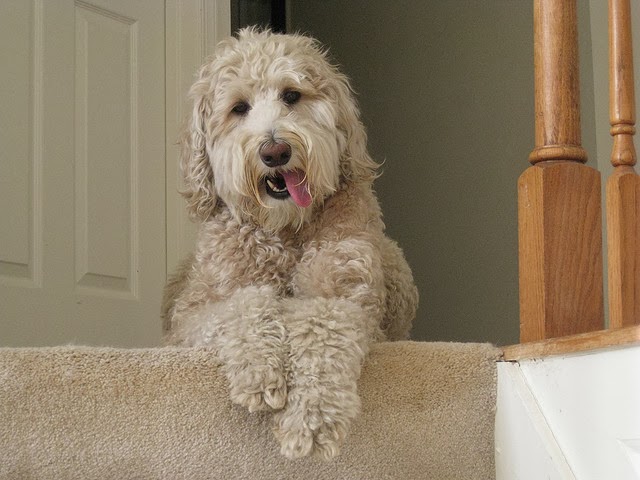 One theory proposes that some of the dogs left the Asian steppes with the Goths, a confederation of German tribes. Some, (the Ostrogoths), went west and their dogs became the German poodle, called in German the poodle-hund or puddle-dog--that is, water-dog. Others, the Visigoths, went south to fight the Romans, and their dogs became the Lion Dog, groomed in the traditional lion cut. In 413 CE, the Visigoths invaded Iberia before being settled in Aquitania north of the Pyrenees in 418, ultimately extending their rule to most of Iberia after 470 CE. A Portuguese Water Dog is first described in 1297 in a monk’s account of a drowning sailor who was pulled from the sea by a dog with a "black coat, the hair long and rough, cut to the first rib and with a tail tuft".

These theories explain how the Poodle and the Portuguese Water Dog may have developed from the same ancient genetic pool. At one time the Poodle was a longer-coated dog, as is one variety of the Portuguese Water Dog. The possibility also exists that some of the long-coated water dogs grew up with the ancient Iberians. In early times, Celtiberians migrated from lands which now belong to southwestern Germany. Swarming over the Pyrenees, circulating over the whole of western Europe, they established bases in Iberia, as well as in Ireland, Wales, and Brittany.

US President Barack Obama and his family with Bo, their Portuguese Water Dog.

The PWD was a breed on the verge of extinction when, during the 1930s, Vasco Bensaude, a wealthy Portuguese shipping magnate, began to seek out fishermen's dogs for use in a breeding program to re-establish the breed. Bensaude's kennel was named Algarbiorum, and his most famous dog was Leão (1931–1942), a very "type-y" (that is, standard-conformant) fisherman's stud dog, who was bred to so many different females that about half of the pedigreed Portuguese Water Dogs in existence can trace their lineage back to him. Bensaude was aided by two Portuguese veterinarians, Dr. Francisco Pinto Soares and Dr. Manuel Fernandes Marques. His work was carried on by Conchita Cintron de Castelo Branco, to whom he gave his last 17 PWDs and all his archives.

Dr. António Cabral was the founder of the Avalade kennels in Portugal. Ch. Charlie de Avalade (Charlie), a brown-coated dog, and C. B. Baluarte de Avalade (Balu) were two of his many famous PWDs. He registered his first PWD in 1954, after Bensaude had pioneered the re-establishment of the breed in Portugal. Cabral worked with Carla Molinari, Deyanne Miller, Sonja Santos and others to establish PWDs in the US. The "Mark of Cabral" is a triangular shape of different color/textured hair, usually 2 to 3 inches (5 to 8 cm) from the base of the tail. Deyanne Miller is the person most responsible for the rise of the PWD in America. In 1972, the Millers, along with 14 others, formed the Portuguese Water Dog Club of America, Inc. (PWDCA). She worked with dogs from both the Cintron and Cabral lineages to establish a stable genetic pool of PWDs in the US at her Farmion kennels. Another early US breeder of PWDs was actor Raymond Burr.

This highly intelligent utilitarian breed is distinguished by two coat types, either curly or wavy; an impressive head of considerable breadth and well proportioned mass; a ruggedly built, well-knit body; and a powerful, thickly based tail, carried gallantly or used purposefully as a rudder. The Portuguese Water Dog provides an indelible impression of strength, spirit, and soundness.

As with all purebred dogs, PWDs are vulnerable to certain genetic defects. Due to the limited gene pool for this breed, conscientious breeders carefully study pedigrees and select dogs to minimize the chance of genetic disease and improper coat. Unfortunately, like many breeds, growing popularity has encouraged breeding by people not knowledgeable about the breed.

Hip dysplasia. Like poodles, PWDs are vulnerable to hip dysplasia, a congenital and developmental problem with the hip joints. However, the risk of a PWD developing hip dysplasia can be greatly reduced by thoroughly checking the pedigrees and health clearances in both the sire and dam of the dog.

Cataracts, PRA, and distichiasis. Cataracts and progressive retinal atrophy (PRA) are two eye diseases found in PWDs. PRA, which causes "night blindness", may lead to complete blindness. Fortunately this is a simple recessive gene. DNA testing, known as "Optigen Testing", is now available which can identify a dog carrying the gene for PRA. A "normal" or "A" dog does not carry the gene for PRA. A "carrier" or "B" dog carries one copy of the PRA gene, and will not express the disease, but may pass the gene to offspring. An "affected" or "C" dog has two copies of the PRA version of the gene and will probably express the disease as late onset Progressive Retinal Atrophy. A "B" or "C" dog should be bred only to an "A" dog to ensure that any offspring will not express the disease. Ingrown eyelashes (distichiasis) occur in some curly-coated breeds, but they are not particularly common in PWDs. Ingrown eyelashes will rub the eye causing extensive corneal ulcerations. The condition is minor so long as it is not ignored, and can be surgically treated if necessary.

GM1 Storage Disease. GM1 Storage Disease, one of a family of conditions called GM1 gangliosidoses, is a recessive, genetic disorder that is inevitably fatal. It is caused by a deficiency of beta-galactosidase, with resulting abnormal storage of acidic lipid materials in cells of the central and peripheral nervous systems, but particularly in the nerve cells. Because PWDs are all rather closely related to one another and share a limited gene pool, PWDs who were GM1 Storage Disease carriers were able to be genetically identified, and the condition has now been almost entirely eliminated from the breed. All breeding stock should be tested for GM-1 storage disease or GM1 gangliosidoses, which is a fatal nerve disease that typically appears when a puppy is approximately six months of age. The affected puppy will show clinical signs of cerebellar dysfunction including ataxia, tremors, paresis, and seizures. The pet may also exhibit a change in temperament. Lesions of the retina and clouding of the cornea may occur.

Juvenile Dilated Cardiomyopathy. Juvenile Dilated Cardiomyopathy (JDCM) is a fatal condition caused by an autosomal recessive gene. Puppies affected with JDCM die suddenly or with very little warning usually between the ages of six weeks to seven months old. The signs and symptoms of JDCM include a 12 to 48 hour onset of loss of appetite, decreased energy level, vomiting, and difficulty breathing. Some pups have no physical signs or symptoms at all, may just collapse and die, or are found dead by the breeder or new owner. At this time, there is no known cure or treatment but there is a way to prevent producing JDCM affected puppies.

Portuguese Water Dogs are known for two things: their skill in the water and their sense of humor. This breed was used on Portuguese fishing boats to herd fish, catch fish, and carry messages between boats. The fishermen regarded them as part of the crew and allowed them to eat the fish and even paid the dogs for their services. The camaraderie of the fishing boat made them people dogs, they love spending time with their families and want to be included in all family activities. Perhaps the fishing boats were were they learned to be showmen, as well. Owners report their dogs are prone to silly behavior, repeating it when it gets a laugh, and each time adding a little more flair. These dogs are excellent with children and make a companion for active families.

Portuguese Water Dogs have stamina to spare. These guys can run all day and come back for more, so couch potatoes need not apply. They are too large for apartment living and are best suited for homes with lots of room to run. They make excellent jogging, biking and hiking companions, and swimming pool owners will have a hard time getting their dogs out of the water. One to two hours per day of vigorous activity will keep your Portuguese Water Dog happy and healthy. This thinking breed needs to work their minds as much as their bodies. Many owners find their dogs excel in agility activities, and this gives the dogs a chance to run, think, and bond with his favorite people.

Portuguese Water Dogs are fairly easy to train. Some can have an independent streak, so training early is the best way to ensure success. They respond to praise and treats, and should never be treated harshly. Discipline, physical correction and shouting will cause your dog to develop avoidance behaviors. They possess the desire to please, and are generally well-behaved by nature, so they rarely test the patience of their trainer. After basic obedience has been mastered, your Portuguese Water Dog should graduate on to advanced obedience or agility training.

The hardest behaviors to train out of your Portuguese Water dog are chewing and jumping on people. They get very excited when you return home or when a visitor comes to the door, and they will grab an object and bound to the door as a greeting. This can go on well into adulthood. Separation Anxiety can develop in this breed, especially if their exercise requirements are not met. Portuguese Water Dogs express anxiety by chewing destructively, so before you leave your dog alone, you should exercise him and leave him with plenty of interesting chew toys in order to save your furniture and shoes.

Though the coat of the Portuguese Water Dog sheds very lightly, regular grooming is still required to keep the coat tangle free. Brushing two to three times per week is the norm. Monthly clips or trims are required to keep the coat looking neat. The coat may be trimmed in a lion clip or a retriever clip. The lion clip involves keeping the muzzle, mid body and rear end short, but keeping a tuft at the end of the tail. The retriever clip is achieved by clipping the coat all over to one inch in length, but leaving the hair at the end of the tail to grow full length. This breed enjoys swimming, and when he comes out of the water, it is important to rinse him with fresh water to remove chlorine, salt, dirt, debris and other things that may cause skin issues or coat problems. The ears should also dried after a swim in order to prevent painful ear infections. Check the ears on a regular basis for signs of wax buildup, irritation or infection. Clean the ears with a cotton ball and a veterinarian-approved cleanser; never use a cotton swab in a dog's ear canal. Teeth should be brushed on a weekly basis to prevent tartar buildup, promote gum health and keep bad breath at bay. Trim nails monthly if the dog does not wear the toenails down naturally outdoors.