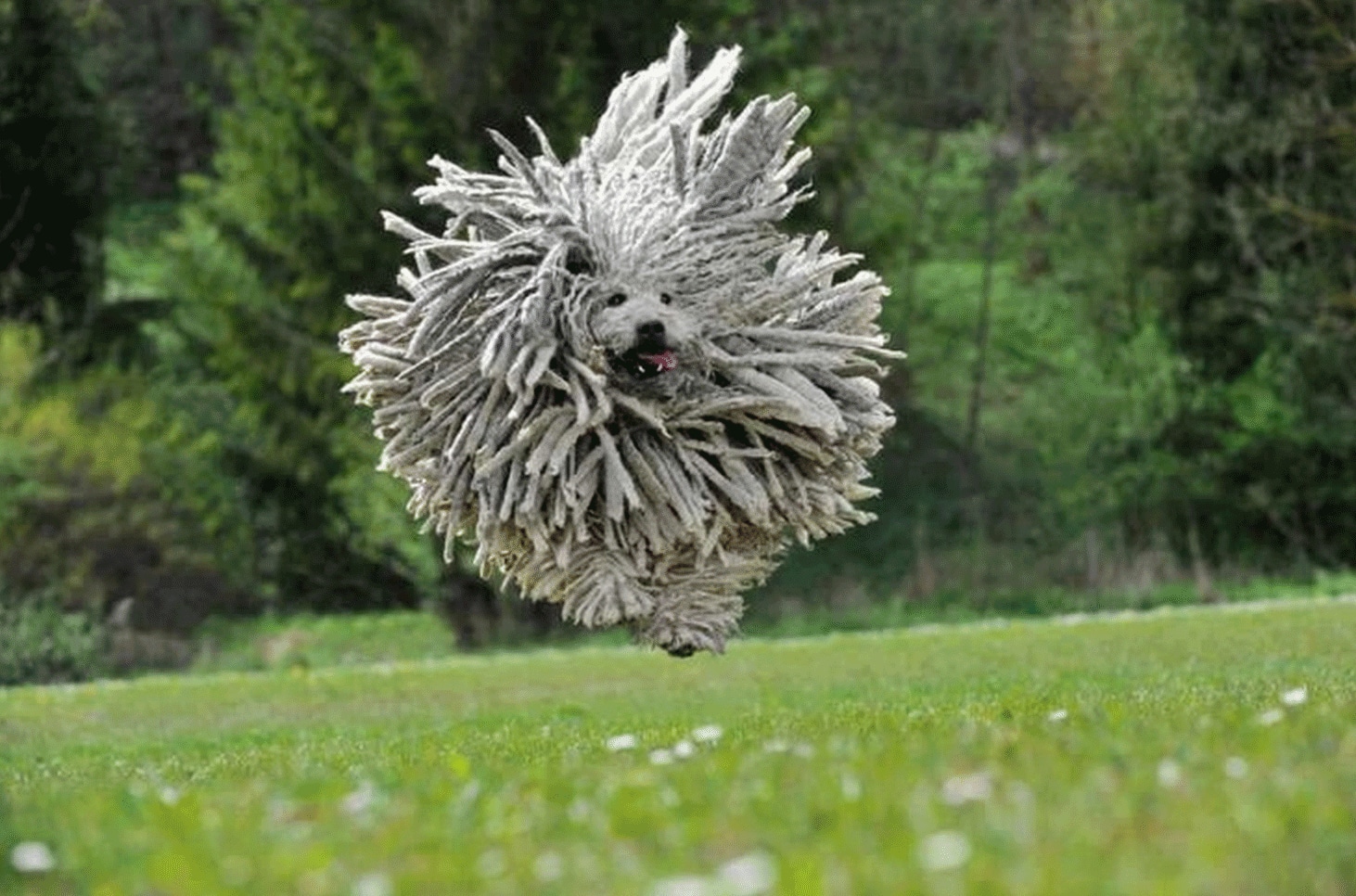 The Puli is an ancient sheepdog, from Hungary, introduced by the migration of the Magyars from Central Asia more than 1,000 years ago. The Puli were used for both herding and guarding livestock. The Puli would commonly work together with the much larger, white Komondor, a Hungarian breed of (solely) livestock guardian dog. The Komondor is a large, solidly built dog, around 30 inches tall. The Komondor (or several Komondorok if there was a large amount of livestock) guarded the sheep or cattle mostly at night, while the Puli herded and guarded them during the day. When wolves or bears attacked the livestock, the Puli would alert the pack and the Komondorok would come and fight the intruders. Puli can be good at fighting off wolves, because the thick coat protects their skin from being bitten. The Komondorok usually rested during daytime but at night walked around the flock, constantly moving, patrolling the area.

Nomadic shepherds of the Hungarian plains valued their herding dogs, paying as much as a year's salary for a Puli. In Asia, the breed dates back 2,000 years and anecdotal evidence suggests that a Puli-like dog existed 6,000 years ago. Although the coats may look slightly similar, the Puli has never worked in water and the Puli's coat does not grow continuously in the same fashion as a corded Poodle's once the cords are formed. The ancestry of the Puli, however, is not known with certainty, as there are some references to ancient Rome.

Possibly the Puli’s ancestors are ancient Hungarian shepherd dogs. Travelers brought the Puli with them to the Carpathian basin, to help organize the flocks, and herd the stallions of the area. Large Komondor or Kuvasz were used for guarding the flock. The Puli was also a suitable guard for flock protection, but was primarily used for herding the animals. Around the beginning of the 20th century a real turning point for the breed came when it was rediscovered but no longer used much as a sheepdog; extensive shepherding was replaced by intensive farming. The Puli’s role was reduced in the life of the flock. Although, their traditional duty was kept, they started to fulfill jobs that were convenient in the circumstances of their owner: they became house dogs. After World War II, the breed became a less popular pet; even now the breed has not been able to regain the popularity it previously enjoyed.

The U.S. Department of Agriculture imported four purebred Pulik in 1935 to Beltsville, Maryland, as part of an experiment, when trying to help American agriculturists concerned with the problem of herding dogs that sometimes killed the animals they had been entrusted to control. The Pulik were bred among themselves and crossed with the German Shepherd, the Chow Chow and perhaps with two turkish sheepdogs which were quartered there at the time. On the tests given by researchers there, Pulik scored, on the average, between 75 and 85, where other herding breeds, scored in the range of 12 to 14. Tests were inconclusive and never published. When WWII broke out, the Pulik were auctioned off to professional breeders and it is thought that it is from these four dogs and their progeny that history of the Puli in the United States begins.

The Puli is a compact, square appearing, well balanced dog of medium size. He is vigorous, alert and active. Striking and highly characteristic is the shaggy coat which, combined with his light-footed, distinctive movement, has fitted him for the strenuous work of herding flocks on the plains of Hungary. Agility, combined with soundness of mind and body, is of prime importance for the proper fulfillment of this centuries-old task.

The Puli is best known for his corded coat, which looks a lot like he is sporting dreadlocks. These sheepdogs were designed to work hard in the field herding and guarding flocks both by day and by night. The modern Puli is an active dog with energy to spare who soaks up as much time and attention as his family is willing to give. They make excellent companions for active families who have the time and energy to commit to properly exercising and socializing their Puli.

Pulis are not lazy lap dogs – they require a lot of vigorous exercise in order to maintain health, happiness and an even temperament. They are best suited for country life, where they have lots of room to run, and possibly flocks of sheep to herd and guard. Suburban Pulis need to both walk and run on a daily basis. The best outlet for these animals (when not herding) is agility training. They are intelligent dogs who will bore of playing fetch or strolling through the neighborhood. Interesting and challenging activities are a must, because Pulis who are bored or under-exercised can become anxious and destructive.

Pulis were developed to make their own decisions in the field, and modern Pulis are still very independent and dominant by nature, making them a handful to train. You must begin early with your Puli, before bad habits have a chance to set in, and if leadership is not properly established, your Puli will assume he is in charge of the household. A calm-assertive presence coupled with generous praise and treats will yield the best results. Once leadership has been established and your Puli has mastered basic obedience, you should move on to agility or herding activities. These are intelligent dogs who need to work their minds as well as their bodies, and they excel in the competitive arena. Socialization should also begin early in a Puli's life. They are natural watch dogs, which means they are suspicious of strangers. You must teach your Puli early on that guests are welcome into your home, so that he knows the difference between “good guys” and “bad guys.”

Pulis have a strong instinct to chase, so unless your dog is working on a farm, he should be kept on a leash or in a fenced yard. Fences should be at least six feet high, as Pulis are quite agile and have been known to scale shorter fences from a dead standstill. Non-canine pets should not be introduced into a Puli's home, as chaos is guaranteed. The Puli is first and foremost a sheepdog, and his purpose in life is to herd and guard his flock. If he doesn't have sheep to work with, he will herd people. Playtime with children should be supervised, because Pulis nip at heels when they herd, and can inadvertently hurt someone. Pulis may also be rather unfriendly to neighborhood children, especially if they play rough with “his” kids. Pulis are not recommended for homes with small children. They are fairly easy-going but they don't have the patience for being climbed on, poked at, or teased. Toddlers may also be inclined to tug on the Puli's unusual corded coat. Neat freaks will not find Pulis to be ideal housemates. Their rough coats tend to trap and hold everything from water, to food, to dust from the floor, to feces.

Before the cords grow in, the uncorded Puli should be brushed, combed and bathed regularly to remove dirt and tangles and distribute the nature oils of the skin. Once the cords form, grooming a Puli takes on a whole new meaning. Never brush the cords, only ever handle by hand. Bathe by first soaking the cords thoroughly in water. Then work in diluted shampoo. Undiluted shampoo can lengthen bath time by hours. Rinse thoroughly, usually a 30 to 45 minute task in itself. Then squeeze the cords dry, once by hand, then with a towel. Sometimes, owners place a sweatshirt over the dog aver a bath to help absorb excess water. Air drying a Puli can take up to two days, though heat drying is possible, but not recommended. The dog can overheat and/or become quite irritable. Because bathing a Puli is such a long, involved process, most owners only bathe their Puli when absolutely necessary. Check the ears on a regular basis for signs of wax buildup, irritation or infection. Clean the ears with a cotton ball and a veterinarian-approved cleanser; never use a cotton swab in a dog's ear canal. Teeth should be brushed on a weekly basis to prevent tartar buildup, promote gum health and keep bad breath at bay. Trim nails monthly if the dog does not wear the toenails down naturally outdoors.