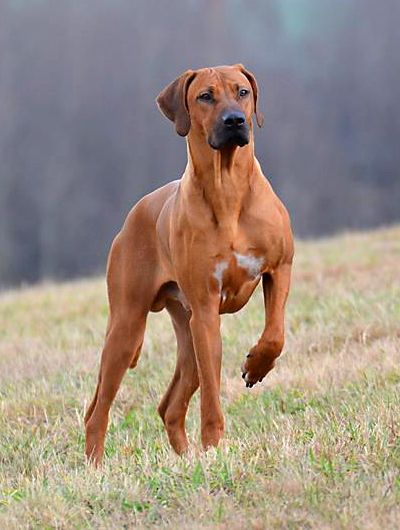 The Khoikhoi people who lived in the Cape Peninsula when the Dutch began trading with the area during the mid 17th century, had a hunting dog which was described as ugly, but noted for its ferocity when acting as a guard dog. This dog measured approximately 18 inches (46 cm) at the withers, with a lean but muscular frame. The ears have been described both as erect and hanging, but the most distinctive feature was the length of hair often growing in the reverse direction along its back. Within 53 years of Dutch colonisation in Southern Africa and the origins of the wagon-trekking boers later known as Afrikaners, who converted vast stretches of wild veld into farmland, hunted for meat and defended their cattle herds, staff, and homesteads from lion, the Europeans were using these local dogs themselves.

By the 1860s, European colonisers had also imported a variety of mainly European dog breeds to this area of Africa, including such dedicated hunting dogs as Great Danes, Bloodhounds, Greyhounds, and terriers. Other breeds came from Arabian traders around the Horn of Africa and with Asian immigrants, particularly into the Cape Colony, and jackal coursing introduced from British India brought lurchers from England and Ireland and the borzoi or Russian wolfhound, and before the era of standardised modern breeds, several breeds may have more rarely contributed to Rhodesian ridgeback genetics. Van Rooyen saw Helm's pair of bitches and decided to breed his own dogs with them to incorporate their guarding abilities. It is not known if these two first direct ancestors of Rhodesian ridgebacks had dorsal hair pattern ridges themselves, but they founded the Rhodesian ridgeback bloodline, so either carried the trait or it was added from other Boer dogs and hybrids with Khoikhoi ridgebacks which van Rooyen bred into his lines over many trials then generations.

After trying pointers and Airedales, crossing with collies gave van Rooyen the best lion hunters, as his son Cornelis Jr. tells us. Pointers, bulldogs (perhaps boerboels, which were actually mainly larger mastiffs) and greyhounds are generally credited in the European core of this mix, with larger terriers such as Irish terriers and perhaps great Danes. Modern Rhodesian ridgeback breeders speak of some of their ridgebacks being too 'mastiffy' though it is uncertain what extent, if any, of actual mastiff heredity may have entered, as from the boerboels and their descendants prevalent in these territories. After initially greyer, rough-coated litters originating from Helm's dogs, van Rooyen's subsequently crossed offspring turned to redder coats, incorporating the KhoiKhoi landrace dog's ridges already carried in Boer dogs within his genomes. They became the foundation stock of a kennel which developed dogs over the next 35 years with the ability to bay lions: that is, a pack of 4-6 Rhodesian ridgebacks holds lions at bay while the hunter makes the kill, though an individual Rhodesian ridgeback is no match for an adult lion in a fight. These dogs were used to hunt not only lions but also other game, including wild pigs and baboons, and they can kill a baboon independently of a human hunter's collaboration.

The original breed standard for the Rhodesian Lion Dog was drafted in 1922 by F. R. Barnes on founding the first Ridgeback Club at a Bulawayo Kennel Club show, then in Southern Rhodesia (now in Zimbabwe), and based on that of the Dalmatian. In 1927, Barnes' standard was approved by the South African Kennel Union with the name amended to Rhodesian ridgeback. Outside the subcontinent and internationally, the first Rhodesian ridgebacks in Britain were shown by Mrs. Edward Foljambe in 1928. In 1950, Mr. and Mrs. William H. O'Brien of Arizona brought six carefully selected Ridgebacks to the US from South Africa. He and his wife and Margaret Lowthian of California began the process of getting the breed accepted by the American Kennel Club. Similarly, in 1952, The Rhodesian Ridgeback Club of Great Britain was founded at Crufts to promote the breed around the United Kingdom to show judges, so a standard for the breed might be recognised. In 1954 the first Challenge Certificates were awarded to dogs shown as Rhodesian ridgebacks at United Kingdom competitions, toward their subsequent recognition by The Kennel Club of Great Britain, and in 1955 the American Kennel Club recognised the Rhodesian ridgeback breed as a member of the hound group.

The Ridgeback represents a strong, muscular and active hound, symmetrical and balanced in outline. A mature Ridgeback is a handsome, upstanding and athletic dog, capable of great endurance with a fair (good) amount of speed. Of even, dignified temperament, the Ridgeback is devoted and affectionate to his master, reserved with strangers. The peculiarity of this breed is the ridge on the back. The ridge must be regarded as the characteristic feature of the breed.

Health conditions that are known to affect this breed are hip dysplasia and dermoid sinus. The ridgeback ranks number six in terms of most affected breeds for thyroid problems recorded by the Orthopedic Foundation for Animals.

Rhodesian Ridgebacks are dignified, athletic dogs whose expressive eyes always look deep in thought. Developed in Africa, this breed was used by lion hunting parties to track, corner, and hold lions. The breed is still used for hunting in some circles, but has come to be more of a family companion than anything else. As puppies they have energy to spare, but with proper exercise and training grow into quiet, dignified housemates. They are not for novice dog owners, as it takes a lot of time and energy to properly train this breed, but for those who are experienced and who are already committed to an active lifestyle, the Rhodesian Ridgeback can be an ideal family dog.

This breed needs a lot of vigorous exercise to maintain health, happiness and an even temperament. Rhodesian Ridgebacks have their roots in Africa, so they can withstand a lot of activity in very high temperatures without slowing down. They require several walks a day and plenty of time to run outdoors. They are athletic enough to jog or accompany bikers. The older they get, the less running they require, but they will always need daily activity. Without proper exercise, this breed can become anxious and destructive. Hunters can use Rhodesian Ridgebacks in the field to track and point for small game, or to track and corner large game. Non-hunting families should enroll their Ridgebacks in organized activities like agility or lure coursing. They make excellent hiking and camping companions, happy to engage in outdoor fun and will guard you faithfully while you picnic or sleep.

Training a Rhodesian Ridgeback can be a challenge. They are independent thinkers who also have a tendency to exhibit dominance. They need to be trained with firmness to establish leadership, but never harshness. Strong discipline will cause a Ridgeback to shut down and ignore you completely. 100% consistency is also crucial when training because Ridgebacks will constantly test boundaries, especially in adolescence, and if you bend the rules just once, he'll take that as an invitation to rule the house.

Rhodesian Ridgebacks are calm and easy going with their own family members, but are naturally wary of strangers. It is important to properly socialize your dog so that this natural wariness doesn't develop into aggression. Teaching your Ridgeback early on that guests are welcome will help him to be more welcoming later in life. This breed is often aggressive toward other dogs and non-family pets. He may get along great with your cat, but should a neighbor's cat wander into his yard, he will chase it. Taking your Ridgeback to puppy school and the dog park to socialize him when he is young, can help stave off dog aggression. Ridgebacks are prone to destructive chewing. This is almost always an indication that he is bored and not getting enough exercise. If your Ridgeback takes to chewing shoes or furniture, you will want to step up his daily routine, and when you leave the house, make sure he has plenty of his own toys and bones to chew on.

Rhodesian Ridgebacks are very low maintenance when it comes to grooming. They need to be brushed once per week with a rubber brush and then wiped down with a damp cloth. They only require full baths as needed, which, when owners stick to a brush/rub down regimen, can literally be once or twice per year. Check the ears on a regular basis for signs of wax buildup, irritation or infection. Clean the ears with a cotton ball and a veterinarian-approved cleanser; never use a cotton swab in a dog's ear canal. Teeth should be brushed on a weekly basis to prevent tartar buildup, promote gum health and keep bad breath at bay. Trim nails monthly if the dog does not wear the toenails down naturally outdoors.