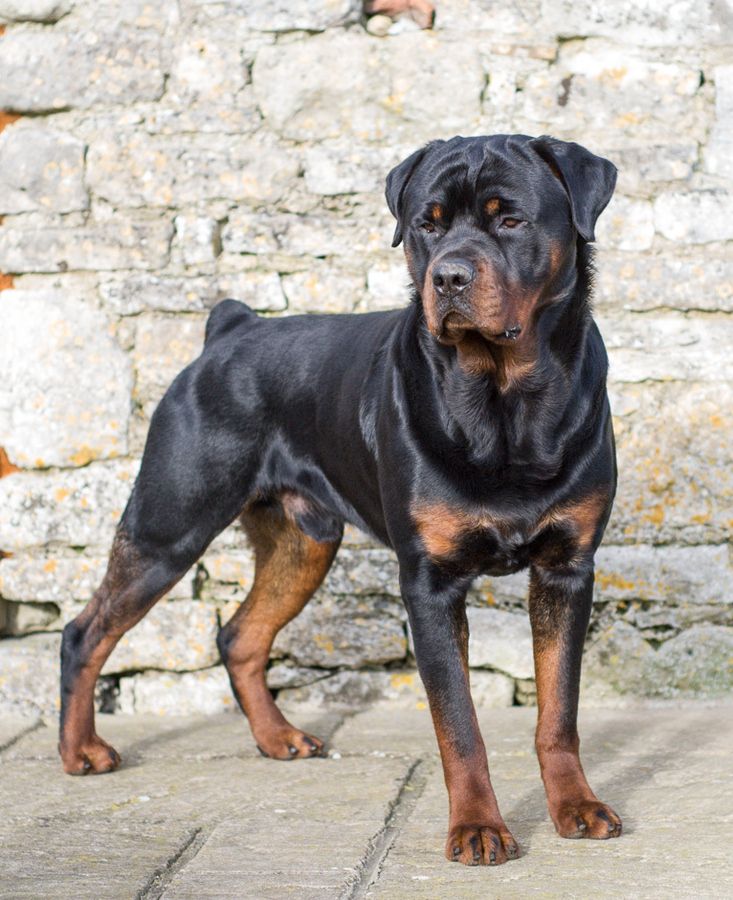 The Rottweiler is one of the oldest of herding breeds. With a history possibly dating back to the Roman Empire, the Rottweiler may be a descendant of ancient Roman drover dogs; a mastiff-type dog that was a dependable, rugged dog with great intelligence and guarding instincts. During their quest to conquer Europe, the Roman legions traveled in large numbers across the continent. The lack of refrigeration meant soldiers brought herds of cattle for food. Drover dogs kept the herd together and guarded it at night. Around A.D. 74 the Roman army travelled across the Alps and into what is now southern Germany. For the next two centuries the Roman drover dogs were continually used in herding and driving cattle for trade even after the Romans were driven out of the area by the Swabians.

A town in this region was eventually given the name Rottweil. It became an important trade center and the descendants of the Roman cattle dogs proved their worth by driving the cattle to market and protecting the cattle from robbers and wild animals. The dogs are said to have been used by traveling butchers at markets during the Middle Ages to guard money pouches tied around their necks. The dogs were eventually known as Rottweiler Metzgerhunds, or "butcher dogs". As railroads became the primary method for moving stock to market, the demand for the Rottweiler breed declined, as did their numbers, so severely diminished by 1882 that a show in Heilbronn, featured only one very poor representative of the breed.

The ideal Rottweiler is a medium large, robust and powerful dog, black with clearly defined rust markings. His compact and substantial build denotes great strength, agility and endurance. Dogs are characteristically more massive throughout with larger frame and heavier bone than bitches. Bitches are distinctly feminine, but without weakness of substance or structure.

Rottweilers are a relatively healthy, disease-free breed. As with most large breeds, hip dysplasia can be a problem. For this reason the various Rottweiler breed clubs have had x-ray testing regimens in place for many years. Osteochondritis dissecans, a condition affecting the shoulder joints, can also be a problem due to the breed's rapid growth rate. A reputable breeder will have the hips and elbows of all breeding stock x-rayed and read by a recognised specialist, and will have paperwork to prove it.

They will also have certificates that their breeding animals do not have entropion or ectropion and that they have full and complete dentition with a scissor bite. As with any breed, hereditary conditions occur in some lines. The Rottweiler is very prone to osteosarcoma which is among the most common causes of early death in Rottweilers. For unknown reasons, Rottweilers are more susceptible than other breeds to become infected with parvovirus, a highly contagious and deadly disease of puppies and young dogs. If overfed or under-exercised, Rottweilers are prone to obesity. Some of the consequences of obesity can be very serious, including arthritis, breathing difficulties, diabetes, heart failure, reproductive problems, skin disease, reduced resistance to disease and overheating caused by the thick jacket of fat under the skin.

Rottweilers have a reputation for being viscous attack dogs, but despite what television and movies may say, this is not their true nature. Rotties are incredibly loyal, which makes them superb watchdogs, and they will protect their family fearlessly – but to be viscous, they must be trained that way. When properly trained, socialized and exercised from puppyhood, Rotties are even tempered and dignified companions. They do not buddy up to just any newcomer, but rather take their time to decide who is worthy of their time and affection. With their families they are affectionate and playful, and most Rottweiler owners note that their dogs seem to not know how large they are, wanting to cuddle up on the couch or the bed. For experienced dog owners who have the time to commit to a large breed, the Rottweiler is a true blue friend.

Rottweilers need moderate exercise to maintain health, happiness and an even temperament. They are far too large for apartment life and are much better suited for the suburbs. Rotties should be walked several times a day, and allowed to have an hour or so of running time, as well. It is important for your Rottie to burn off as much energy as possible during the day, as a bored Rottweiler will chew and can destroy your living room in no time flat. In the summer months, a Rottweiler's exercise should be limited, however, as their black coats make them prone to overheating.

Rottweilers are not the most agile dogs in the world, but they do appreciate the extra time and exercise involved in agility activities. Rottweilers were originally used to drive cattle and haul carts, and they enjoy having a “job” to do. Agility requires them to think and obey, this giving them a “job.” If you can't do agility, walking your Rottie with a backpack can help make him feel as though he is “working” and also provides a more extensive workout.

Rotties can be a handful to train, and novice dog owners can sometimes become overwhelmed by the task. This large breed often exhibits dominance and assumes he is the one in charge of the house. Rules and boundaries must be enforced with 100% consistency – if you give a Rottweiler an inch, he will take a mile (and then some).

Training should be conducted confidence and firmness, but never harshness. A Rottweiler needs to respect you in order to accept leadership from you, and his response to anger and physical punishment is t disregard you as the leader and assume the role himself. Training should begin early, before any bad habits can develop. Socialization should also be conducted early and often. Rotties are naturally wary of strangers, so they must learn that guests are welcome into his home.

Well bred Rotties can be a joy to live with and are never aggressive toward strangers, no matter how wary they may be. Indiscriminate breeding of this popular dog, however, has caused many Rotties to be born with unstable blood lines. It is important that potential owners conduct extensive research on a breeder before adopting. Aggression is not a natural Rottweiler tendency, and any breeder who claims otherwise should be avoided. Rottweilers love to chew, and if not properly exercised or given enough of his own interesting bones to chew, he will become bored and turn to household items. Their jaws are tremendously strong and Rotties can make quick work of furniture.

Brush the Rottweiler on a weekly basis to remove loose hair and distribute natural skin oils to help keep the coat shiny and healthy. Twice a year the Rottweiler will shed heavily, and brushing may need to occur two or three times per week, or daily depending on the individual. Bathe only as needed. Check the ears on a regular basis for signs of wax buildup, irritation or infection. Clean the ears with a cotton ball and a veterinarian-approved cleanser; never use a cotton swab in a dog's ear canal. Teeth should be brushed on a weekly basis to prevent tartar buildup, promote gum health and keep bad breath at bay. Trim nails monthly if the dog does not wear the toenails down naturally outdoors.