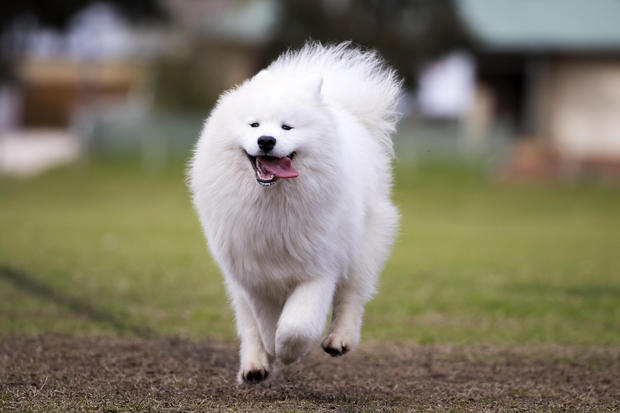 The name Samoyed comes from the Samoyede, a semi-nomadic people from Asia who migrated to Siberia a thousand years ago. They bred dogs for hard work in the coldest habitable places on earth. In the Siberian town of Oymyakon, for instance, temperatures of minus-60 degrees are common. The Samoyede people lived in tents and huddled for warmth with their dog packs during the Arctic nights. This type of human-canine cooperation for mutual survival forged a tight bond between Samoyeds and people. When not sledging heavy loads across vast expanses of Siberia, Samoyed dogs earned their feed as watchdogs and hunters.

Samoyeds were originally used for hunting, herding reindeer, and hauling sledges for the Samoyede people in Siberia. Fridtjof Nansen believed that the use of sled dogs was the only effective way to explore the north and used Samoyeds on his polar expeditions. The Samoyed has been identified as a basal breed that predates the emergence of the modern breeds in the 19th Century.

Samoyeds, the smiling sledge dogs, were bred for hard work in the world’s coldest locales. In the Siberian town of Oymyakon, for instance, temperatures of minus-60 degrees are common. The Sammy’s famous white coat is thick enough to protect against such brutal conditions. Powerful, agile, tireless, impervious to cold—Sammies are drop-dead gorgeous but highly functional. Even their most delightful feature, a perpetual smile, has a practical function: The mouth’s upturned corners keep Sammies from drooling, preventing icicles from forming on the face.

For the Samoyeds in the veterinary literature several breed-specific hereditary diseases are described:

Samoyeds are lively, happy dogs who adore people and often have a mischievous sense of humor. They are excellent with children and always have time for a romp in the yard, especially in the snow. Samoyeds will bark to announce a visitor, but they are not guard dogs as once they are done announcing the newcomer, will most likely cozy up to the visitor to solicit a rub down. Samoyeds are great family dogs, though they tend to favor one person above all others – usually the person who is in charge of feeding and exercise. They are excellent companions for people who like the outdoors – Samoyeds are always up for a good hike in the woods, and will be happy to keep you warm overnight on a camping trip. They can be difficult to train, but Sammies are generally well behaved and make a great choice for fist time dog owners.

Samoyeds need a moderate amount of vigorous activity in order to maintain health and happiness. The winter time is their favorite time of year, and you can be sure your Sammy will entertain himself for hours in the snow, especially if he has children to play with. Without snow, you'll want to walk your Smoyed several times a day and allow him to stretch his legs and run several times per week, especially as a puppy. If a Samoyed does not get enough exercise he will let you know by chewing your personal possessions.

Though they love people to pieces, Sammies don't always like to listen and training can be a challenge. Sessions should be kept short in order to maintain the dog's interest, and activities should be varied. Shower your Samoyed in treats and praise when he does things correctly in order to reinforce good behavior. Never treat your Samoyed harshly, as this will cause him to avoid you and stop listening to you all together. Once basic obedience has been mastered, you can move on to advanced obedience or agility. He may not excel at these levels, but he will enjoy the activity and will soak up the extra time spent with someone he loves.

Sammies bark early and often. Their bark is very high-pitched, which can be grating to the nerves. Teaching your Samoyed to obey commands to stop barking can minimize the annoyance, but it is very hard to train this behavior out of a Sammy. Samoyeds were raised to be contributing members of the Samoyede tribes of Siberia. They hunted, hiked, hauled sleds and kept beds warm for their tribespeople. This desire to interact with humans is what makes Sammies such great family dogs today, but it is also their downfall. If a Samoyed is left alone for too long, he will become anxious, which he will exhibit by chewing anything he can get his teeth on. For this reason, Samoyeds are best served by families with a stay at home or work at home parent, for with people who have flexible work schedules.

The Samoyed has a profuse double coat, with a longer outer coat of harsh hair and a soft, thick, wooly undercoat. Samoyeds shed quite a bit all the time, even more so during shedding season, which can occur once or twice a year. Daily brushing will help to remove dirt and loose hairs and keep the dog looking his best. Mats or tangles can be worked out with a slicker brush or metal comb. The nails should be trimmed every three to four weeks or as needed.