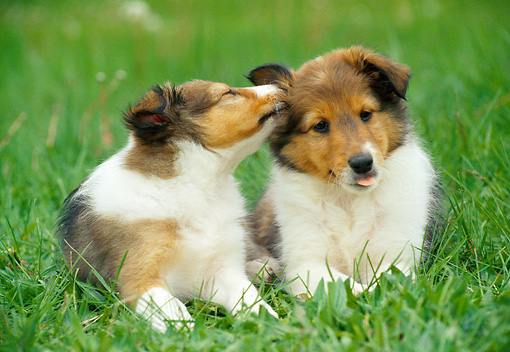 Unlike many miniature breeds that resemble their larger counterparts, this breed was not developed simply by selectively breeding the Rough Collie for smaller and smaller size. The original sheepdog of Shetland was a Spitz-type dog, probably similar to the modern Icelandic Sheepdog. This dog was crossed with mainland working collies brought to the islands, and then after being brought to England, it was further extensively crossed with the Rough Collie, and other breeds including some or all of the extinct Greenland Yakki, the King Charles Spaniel (not the Cavalier), the Pomeranian, and possibly the Border Collie. The original Spitz-type working sheepdog of Shetland is now extinct, having been replaced for herding there by the Border Collie. The Shetland Sheepdog in its modern form has never been used as a working dog on Shetland, and ironically it is uncommon there.

When the breed was originally introduced breeders called them Shetland Collies, which upset Rough Collie breeders, so the name was changed to Shetland Sheepdog. During the early 20th century (up until the 1940s), additional crosses were made to Rough Collies to help retain the desired Rough Collie type – in fact, the first AKC Sheltie champion's dam was a purebred rough Collie.

The year 1909 marked the initial recognition of the Sheltie by the English Kennel Club, with the first registered Sheltie being a female called Badenock Rose. The first Sheltie to be registered by the American Kennel Club was "Lord Scott" in 1911.

The Shetland Sheepdog is a small, alert, rough-coated, longhaired working dog. He must be sound, agile and sturdy. The outline should be so symmetrical that no part appears out of proportion to the whole. Dogs should appear masculine; bitches feminine.

For the most part, Shelties are athletic and healthy. Like the Rough Collie, there is a tendency toward inherited malformation and disease of the eyes. Each individual puppy should have his/her eyes examined by a qualified veterinary ophthalmologist. Some lines may be susceptible to hypothyroidism, epilepsy, hip dysplasia, or skin allergies. Compared to other dogs, Shetland Sheepdogs have a four-fold increased risk of developing transitional cell carcinoma, a cancer of the bladder.

Dermatomyositis may occur at the age of 4 to 6 months, and is frequently misdiagnosed by general practice veterinarians as sarcoptic or demodectic mange. The disease manifests itself as alopecia on the top of the head, supra- and suborbital area and forearms as well as the tip of the tail. If the disease progresses to its more damaging form, it could affect the autonomic nervous system and the dog may have to be euthanised. This disease is generation-skipping and genetically transmitted, with breeders having no clear methodology for screening except clear bloodline records. Deep tissue biopsies are required to definitively diagnose dermatomyositis. Lay assessment of end-stage dermatomyositis is observed difficulty or inability to swallow, even water. At this point, the dog must be euthanised.

Von Willebrand disease is an inherited bleeding disorder. In Shelties, affected dogs as a general rule are not viable and do not live long. The Sheltie carries type III of von Willebrands, which is the most severe of the three levels. There are DNA tests that were developed to find von Willebrands in Shelties. It can be done at any age, and it will give three results: affected, carrier and non-affected. Shelties may also suffer from hypothyroidism, which is the under-functioning thyroid gland. It is an Autoimmune disease where the immune system attacks the thyroid gland. Clinical symptoms include hair loss or lack of coat, over or under-weight, and listlessness.

Although small breed dogs are not usually plagued by hip dysplasia, it has been identified in Shelties. Hip dysplasia occurs when the head of the femur and the acetabulum do not fit together correctly, frequently causing pain or lameness. Hip dysplasia is thought to be genetic. Many breeders will have their dogs' hips x-rayed and certified by the Orthopedic Foundation for Animals.

Shetland Sheepdogs are an all-around family dog. Shelties love their families and want to be included in all activities, both outdoors and indoors. They get along well with kids, and enjoy interactive outdoor games. Shelties are highly intelligent and pick up training very quickly. They are often champions in the competitive arena in obedience, agility and herding. For active families who prefer a smaller dog, the Sheltie is an excellent fit.

Shelties are small enough to live in an apartment, as long as a commitment to regular exercise has been made. Shelties require daily walks and the opportunity to run as often as possible. Shelties do well on a leash, but off leash they should be in a fenced in area at all times, for their own safety. They have a strong urge to herd and will try to herd groups of kids, animals or even cars. If possible, your Sheltie should be enrolled in advanced obedience, trick training, agility, or organized herding activities. These smart dogs need to use their minds as much as their bodies and appreciate the opportunity to learn new things as they exercise. Properly exercising and occupying your Sheltie's brain help keep them calm indoors. A bored Sheltie can bark obsessively, which can drive the house crazy and alienate your neighbors – especially in an apartment building.

Shelties are highly trainable dogs. They pick up new commands quickly and possess a strong desire to please. Excited praise and treats are all the motivation needed during training sessions. Shetland Sheepdogs should never be treated harshly, as they will become defensive. Shelties are excellent showmen and enjoy being the center of attention in the home. Trick training can be a great way to keep your Sheltie mentally sharp and get some extra bonding time.

The Sheltie bark is a trademark of the breed. It is high pitched and ear-piercing and can set your teeth on edge. It is essential to train your Sheltie to obey commands to quiet down. Socialization is also important so that your Sheltie learns to alert you when strangers are approaching, but not friends or the mailman or every incoming dog, cat, bike, or leaf that wanders near the house. Shelties are a popular breed and this has unfortunately led to a lot of indiscriminate breeding. This practice means there are a lot of Shelties born with unstable temperaments. It is crucial to research any potential breeder extensively and also to meet your potential puppy's parents before committing to a Shetland Sheepdog.

The Shetland Sheepdog's coat requires brushing at least once per week with a pin brush to remove loose hair, undo tangles and prevent mats from forming. When brushing, it is important to get the whole way down to the skin and always use a spray bottle to wet the hair before brushing. Working with a dry coat will damage the hair. The hair behind the ears and under the “armpit” need special care, as mats are prone to form there. During shedding season, the coat will need to be brushed daily. Males blow coat once a year and intact females blow coat twice per year. The Sheltie's coat is naturally dirt and water resistant, so they only require baths as needed. This varies greatly depending upon the individual. Check the ears on a weekly basis for signs of infection, irritation, or wax build up. Cleanse regularly with a veterinarian-approved cleanser and cotton ball. Brush the teeth at least once per week to prevent tartar buildup and fight gum disease. Additionally, nails should be trimmed once per month if the dog does not wear the toenails down naturally.