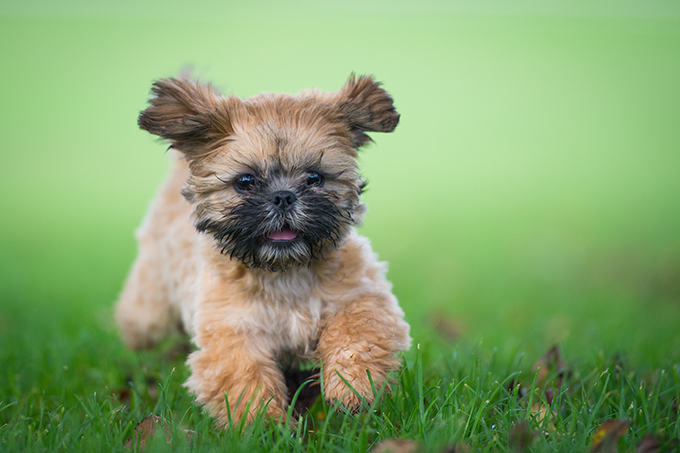 DNA analysis placed the ancestors of today's Shih Tzu breed in the group of "ancient" breeds indicating "close genetic relationship to wolves." Another branch coming down from the "Kitchen Midden Dog" gave rise to the Papillon and Long-haired Chihuahua and yet another "Kitchen Midden Dog" branch to the Pug and Shih Tzu. It is also said that the breed originated in China, hence the name "Lion Dog", in 800 B.C.

There are various theories of the origins of today's breed. Theories relate that it stemmed from a cross between the Pekingese and Lhasa Apso, a Tibetan dog gifted by the Dalai Lama to Chinese emperors near the end of the 17th century. Dogs during ancient times were selectively bred and seen in Chinese paintings. The dogs were favorites of the Chinese royals and so prized that, for years, the Chinese refused to sell, trade, or give any away. The first dogs of the breed were imported into Europe (England and Norway) in 1930 and were classified by the Kennel Club as "Apsos". The first European standard for the breed was written in England in 1935 by the Shih Tzu Club, and the dogs were recategorised as Shih Tzu. The breed spread throughout Europe, and was brought to the United States after World War II, when returning members of the U.S. military brought back dogs from Europe, in the mid 1950s. The Shih Tzu was recognized by the American Kennel Club in 1969 in the Toy Group.

The breed is now recognized by all of the major kennel clubs in the English-speaking world. It is also recognized by the Fédération Cynologique Internationale for international competition in Companion and Toy Dog Group, Section 5, Tibetan breeds. In the United States, the Shih Tzu ranked the 15th most popular breed in 2013, falling slightly in popularity since 2012, when it was placed in 11th position. In 1934 the Shih Tzu Club of England was founded and the breed was officially recognised by the Kennel Club (UK) on 7 May 1940 when it became eligible for Challenge Certificates, none were awarded until 1949.

The Shih Tzu is a sturdy, lively, alert toy dog with long flowing double coat. Befitting his noble Chinese ancestry as a highly valued, prized companion and palace pet, the Shih Tzu is proud of bearing, has a distinctively arrogant carriage with head well up and tail curved over the back. Although there has always been considerable size variation, the Shih Tzu must be compact, solid, carrying good weight and substance. Even though a toy dog, the Shih Tzu must be subject to the same requirements of soundness and structure prescribed for all breeds, and any deviation from the ideal described in the standard should be penalized to the extent of the deviation.

A number of health issues, some of them hereditary, have been found in individual Shih Tzu, and are listed below.

The name Shih Tzu means “little lion,” but these love bugs are anything but fierce and ferocious. This breed is one of the best all-around breeds: they can live in any sized home, get along well with other pets, are excellent for families, single people and make ideal companions for the elderly; they are generally well behaved, are fairly easy to train and are cute as little buttons with their unique underbite. Shih Tzu owners love this quote by American composer James Mumsford, which they think accurately depicts the Shih Tzu, “... a dash of lion, several teaspoons of rabbit, a couple of ounces of domestic cat, one part court jester, a dash of ballerina, a pinch of old man, a bit of beggar, a tablespoon of monkey, one part baby seal, (and) a dash of teddy bear.”

Shih Tzus are lap dogs and are by no means active, outdoorsy dogs. A simple walk around the block and some romping time in the yard or at the park are enough to meet their daily exercise requirements. They much prefer clowning around the house or curling up on a lap to a rigorous cardio workout. Their size makes them ideal for apartments and condominiums, but they can be just as happy in sprawling estates.

Shih Tzus can be a handful to train, but once they realize there are rewards involved, generally come around rather quickly. They can stubborn and won't do anything unless they know what's in it for them. Training should begin early, sessions should be kept short, and activities should be varied in order to keep the dog interested in what is going on. Lots of excited praise and treats can help motivate a Shih Tzu to learn new behavior. Housebreaking a Shih Tzu can take six to eight months, or longer depending on the dog. Crate training can help speed the process, but some owners prefer the breeder housebreak the dog before bringing him home.

Shih Tzus make excellent watchdogs. They are alert, vigilant and will reliably bark when someone approaches his house. If not properly trained, however, a Shih Tzu's barking can quickly get out of hand. Training must include lessons on obeying commands to cease barking.

Grooming a Shih Tzu is a time-consuming endeavor. Daily brushing and combing is a must to remove tangles, and bathing is usually necessary once per week. Brushing must reach all the way down to the skin in order to properly prevent tangles and mats. Owners who do not show their Shih Tzu often opt to clip the hair short to avoid the constant upkeep. Clipped dogs require trims every six to eight weeks. Check the ears on a weekly basis for signs of infection, irritation, or wax build up. Cleanse regularly with a veterinarian-approved cleanser and cotton ball. Brush the teeth at least once per week to prevent tartar buildup and gum disease. Small dogs are prone to dental problems later in life, so brushing more often is a good idea. Additionally, nails should be trimmed once per month if the dog does not wear the toenails down naturally.