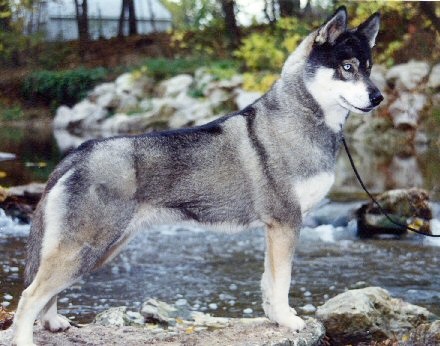 The Siberian Husky, Samoyed, and Alaskan Malamute are all breeds directly descended from the original sled dog. It is thought that the term "husky" is a corruption of the nickname "Esky" once applied to the Eskimo and subsequently to their dogs.

With the help of Siberian Huskies, entire tribes of people were able not only to survive, but to push forth into terra incognita. Admiral Robert Peary of the United States Navy was aided by this breed during his expeditions in search of the North Pole. Dogs from the Anadyr River and surrounding regions were imported into Alaska from 1908 (and for the next two decades) during the gold rush for use as sled dogs, especially in the "All-Alaska Sweepstakes," a 408-mile (657-km) distance dog sled race from Nome, to Candle, and back. Smaller, faster and more enduring than the 100- to 120-pound (45- to 54-kg) freighting dogs then in general use, they immediately dominated the Nome Sweepstakes. Leonhard Seppala, the foremost breeder of Siberian Huskies of the time, participated in competitions from 1909 to the mid-1920s.

In 1930, exportation of the dogs from Siberia was halted. The same year saw recognition of the Siberian Husky by the American Kennel Club. Nine years later, the breed was first registered in Canada. The United Kennel Club recognized the breed in 1938 as the "Arctic Husky," changing the name to Siberian Husky in 1991. Seppala owned a kennel in Nenana before moving to New England, where he became partners with Elizabeth Ricker. The two co-owned the Poland Springs kennel and began to race and exhibit their dogs all over the Northeast.

As the breed was beginning to come to prominence, in 1933 Navy Rear Admiral Richard E. Byrd brought about 50 Siberian Huskies with him on an expedition in which he hoped to journey around the 16,000-mile coast of Antarctica. Many of the dogs were trained at Chinook Kennels in New Hampshire. Called Operation Highjump, the historic trek proved the worth of the Siberian Husky due to its compact size and greater speeds. Siberian Huskies also served in the United States Army's Arctic Search and Rescue Unit of the Air Transport Command during World War II. Their popularity was sustained into the 21st century. They were ranked 16th among American Kennel Club registrants in 2012, rising to 14th place in 2013.

The original sled dogs bred and kept by the Chukchi were thought to have gone extinct, but Benedict Allen, writing for Geographical magazine in 2006 after visiting the region, reported their survival. His description of the breeding practiced by the Chukchi mentions selection for obedience, endurance, amiable disposition, and sizing that enabled families to support them without undue difficulty. Siberians gained in popularity with the story of the "Great Race of Mercy," the 1925 serum run to Nome, featuring Balto and Togo. Although Balto is considered the more famous, being the dog that delivered the serum to Nome after running the final 53-mile leg, it was Togo who made the longest run of the relay, guiding his musher Leonhard Seppala on a 91-mile journey that included crossing the deadly Norton Sound to Golovin.

The bronze statue of Balto that has been displayed in New York City’s Central Park since 1925 is one of its enduringly popular features. Several purebred Siberian Huskies portrayed Diefenbaker, the "half-wolf" companion to RCMP Constable Benton Fraser, in the CBS/Alliance Atlantis TV series Due South. In 1960, the US Army undertook a project to construct an under the ice facility for defense and space research, Camp Century, part of Project Iceworm involved a 150+ crew who also brought with them an unofficial mascot, a Siberian Husky named Mukluk.

The Siberian Husky is a medium-sized working dog, quick and light on his feet and free and graceful in action. His moderately compact and well furred body, erect ears and brush tail suggest his Northern heritage. His characteristic gait is smooth and seemingly effortless. He performs his original function in harness most capably, carrying a light load at a moderate speed over great distances. His body proportions and form reflect this basic balance of power, speed and endurance.

A 1999 ASPCA publication gives the average life span of the Siberian Husky as 12 to 14 years. Health issues in the breed are mainly genetic, such as seizures and defects of the eye (juvenile cataracts, corneal dystrophy, canine glaucoma and progressive retinal atrophy) and congenital laryngeal paralysis. Hip dysplasia is not often found in this breed; however, as with many medium or larger-sized canines, it can occur. The Orthopedic Foundation for Animals currently has the Siberian Husky ranked 155th out of a possible 160 breeds at risk for hip dysplasia, with only two percent of tested Siberian Huskies showing dysplasia. Siberian Huskies used for sled racing may also be prone to other ailments, such as gastric disease, bronchitis or bronchopulmonary ailments ("ski asthma"), and gastric erosions or ulcerations. Modern Siberian Huskies registered in the US are largely the descendants of the 1930 Siberia imports and of Leonhard Seppala’s dogs, particularly Togo. The limited number of registered foundational dogs has led to some discussion about their vulnerability to the founder effect.

According to the AKC Standard, the Siberian Husky "does not display the possessive qualities of the guard dog, nor is he overly suspicious of strangers or aggressive with other dogs." Their exotic, wolf-like appearance makes Huskies appealing to many people, and their even temperament, love of other dogs and indifference to strangers makes them ideal family dogs. Huskies have a zest for life that is unmatched by few breeds. Every time a Husky is outside, it's as if it's his first time and well into adulthood Huskies play with the vigor of a puppy. They may seem like a good family dog for first time dog owners, but Huskies can often be “too much dog” for a novice. They require extensive training and exercise in order maintain good behavior and only those with the time and energy to fully commit to a Husky should take on this breed. But Husky owners agree, you get out of a Siberian Husky what you put into him, and these reliable dogs are worth the effort.

Siberian Huskies need a lot of vigorous activity in order to maintain health and happiness. They were developed as sled dogs, which means they have energy and endurance to spare, so adopting a Husky means adopting an active lifestyle. This breed enjoys long walks, hikes, jogs and bike rides. In the yard they can play fetch for hours, and some even like to play frisbee. Huskies will feel as though they died and went to heaven when at the dog park with other dogs to run, romp and wrestle with. Their medium size makes Siberian Huskies appealing to apartment dwellers, but this may not be the best living situation for a Husky. They are rowdy and rambunctious well into adulthood and need plenty of room to move about.

Husky owners claim their dogs have the ability to perform at the top of their obedience classes, but when they come home they ignore everything they learned, only to turn it back on again when they return to the next class. This breed is notoriously difficult to train and are generally not well suited for first time owners. Huskies require firm leadership and 100% consistency when it comes to boundaries and rule enforcement. Their expressive eyes can be used to manipulate the softies of the house, so all family members must also be “trained” to be consistent with rules and leadership.

The popularity of the breed has led to indiscriminate breeding of the Siberian Husky, and there are many dogs being born into blood lines with uneven temperaments. When adopting a Husky, it is important to do extensive research on breeders, and if you get your Husky from a rescue, the organization should provide you with as much information as possible. Well bred Huskies should never be aggressive or overly shy and timid. Huskies are notorious escape artists, managing to foil fences, screen doors, garages and other holding devices. You should never leave your Husky unsupervised in the yard or with only a screen separating him from the wild blue yonder.

Huskies are heavy shedders – they lose hair year round. Shedding is especially heavy twice per year as they seasonally blow their coats. Dogs in cooler climates typically shed less than dogs who live in warm areas. Brushing the Husky once per week at a minimum can help keep shedding under control and prevent mats from forming, though daily brushing is required during shedding season. Siberian Huskies are odor free, naturally clean animals who, like cats do, will clean themselves on a regular basis. This means that it's only necessary to bathe a Siberian Husky as needed. Check the ears on a weekly basis for signs of infection, irritation, or wax build up. Cleanse regularly with a veterinarian-approved cleanser and cotton ball. Brush the teeth at least once per week to prevent tartar buildup and fight gum disease. Additionally, nails should be trimmed once per month if the dog does not wear the toenails down naturally.