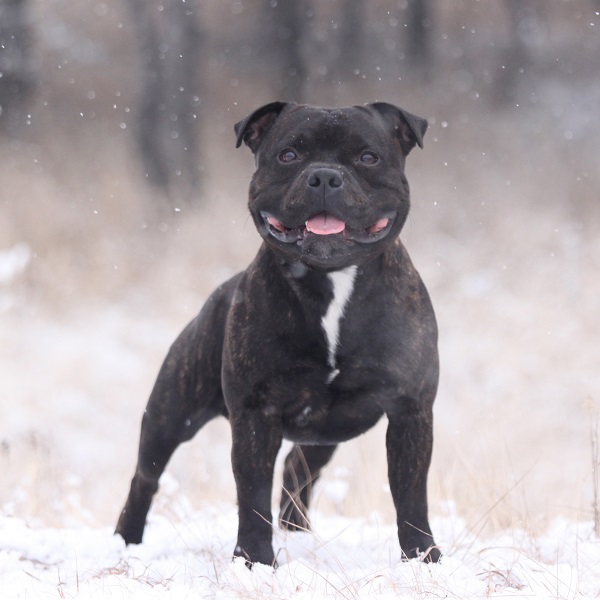 Before the 19th century, blood sports such as bull baiting, bear baiting and cock fighting were common. At the cattle market, bulls were set upon by dogs purportedly as a way of tenderising the meat and providing entertainment for the spectators. Blood sport with bears and other animals was organised as entertainment. The early bull and terrier types were not bred to resemble the breeds of today, but rather for the characteristic known as gameness, with the pitting of dogs against bear or bull; testing the strength and skill of the dogs. Landrace working dogs crossbred with bulldogs provided the ancestral foundation stock for the Staffordshire Bull Terrier. These bloodsports were officially eliminated in 1835 as Britain began to introduce animal welfare laws. Dog fighting involved gambling; dogs were released into a pit, and the last dog still fighting or surviving was recognised the winner. A dog fighting contest was cheaper to organise and easier to conceal from the law.

The modern breed is one that has a temperament suitable as a companion dog. It is a dog worthy to show and was accepted by The Kennel Club as the Staffordshire Bull Terrier on 25 May 1935. The Staffordshire Bull Terrier Club was formed in June 1935. It is unusual for a breed to be recognised without a club in existence first, and even more unusual for there not to have been a breed standard in place. A standard was not drawn up until June 1935 at the Old Cross Guns, a Black Country pub in Cradley Heath where 30 Stafford enthusiasts gathered and devised the standard and elected the club's first secretary, Joseph Dunn, a well-known figure connected with the breed. Challenge certificates were awarded to the breed in 1938, and the first champions were Ch. Gentleman Jim (bred by Joseph Dunn) and Ch. Lady Eve (owned by Joseph Dunn), both taking titles in 1939. The breed was recognised in the U.S. by the American Kennel Club in 1975.

The Staffordshire Bull Terrier is a smooth-coated dog. It should be of great strength for its size and, although muscular, should be active and agile.

Staffordshire Bull Terriers are known to suffer from hereditary cataracts and L-2-hydroxyglutaric aciduria—a metabolic disorder resulting in behavioural changes and dementia-like symptoms—both of which are detectable by DNA tests. Distichiasis (commonly known as “double eyelash”) and persistent hyperplastic primary vitreous—a condition whereby the blood supply to the ocular lens fails to regress and fibrovascular tissue forms, causing hazy vision—both of which are checked by way of an ocular examination throughout the life of a breeding stud or brood-bitch to minimise the transfer and spread of these conditions. The breed is known to be at a higher risk from mastocytoma (mast cell tumours) than the general population of dogs.

The Staffordshire Bull Terrier resembles other “tough” breeds like the American Staffordshire and Pit Bull Terrier, but these sturdy dogs look a lot tougher than they really are. The motto of many Stafford owners is, “He's a lover, not a fighter.” Staffords would much rather romp around and play all day than grouse or fight or even stand around looking imposing. They have a zest for life and eat up new experiences with the zeal of a puppy. They love to be with people and they don't particularly care what the activity is: watching TV reading a book in the sun, waking, running, going for a ride in the car – the Stafford just wants to be with the people he loves. They also don't like to make their own choices about what to do, and therefore don't like being left alone, so Staffordshire Bull Terriers are best suited for active families where someone is always home with them. Despite their imposing look and tendency toward dog aggression, Staffords are actually very good with children. Toddlers are not recommended, but older kids who understand a dog's boundaries will find that a Stafford will gladly accept the role of best friend, playmate, and evening pillow during TV time.

Though Staffords are happy to lounge around all day if you let them, these dogs need plenty of good running exercise every day to maintain their health and muscle tone. They enjoy walks, hikes, jogs or simple games of catch in the backyard. Enrolling them in organized activities like agility or flyball keeps their minds as sharp as their bodies. Staffords are adaptable to just about any living situation be it apartment or estate, city or country. No matter what his living arrangements, a commitment should be made to properly exercise a Staffordshire Bull Terrier.

Staffords can be a handful to train. They are stubborn and willful and though they love you to pieces, don't particularly care about doing what they are told. Novice dog owners should consult with a professional trainer who understands the nuances of the Stafford personality. Experienced dog owners should be able to handle this breed just fine. They need confident leadership, a bit of firmness (they can handle the criticism), and 100% consistency. Some trainers recommend letting your Stafford run for a bit before conducting training sessions to help calm his mind and keep him focused.

Staffordshire Bull Terriers have very strong jaws and they love to chew, especially as puppies. It is essential to the life of your furniture that you keep plenty of bones and chew toys around to satisfy your Stafford's urge to chew. Dog aggression is very common in adult Staffords. If they think another dog is challenging them, they will not hesitate to engage. Socializing your puppy to understand canine manners can help, but it's best to keep your Stafford on a leash at all times, and at home his yard should be fenced. The leash and fence will also help keep your Stafford from taking off after birds, squirrels, rabbits and cats, which they love to chase.

Staffords shed their entire coat annually, and shed moderately the rest of the year. Regular brushing will keep loose hair under control. They do not emit a dog odor, so bathe only as needed. Check the ears on a weekly basis for signs of infection, irritation, or wax build up. Cleanse regularly with a veterinarian-approved cleanser and cotton ball. Brush the teeth at least once per week to prevent tartar buildup and fight gum disease. Additionally, nails should be trimmed once per month if the dog does not wear the toenails down naturally.