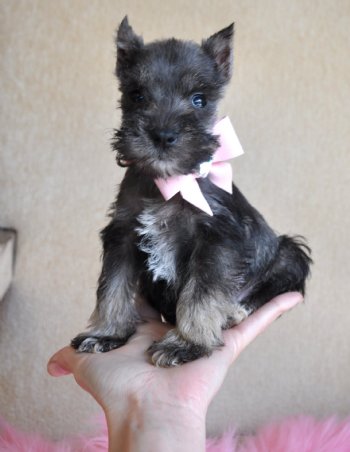 In the Middle Ages, schnauzer-type dogs of medium size were developed from herding, ratting and guardian breeds in Western Europe. A dog of the peasant farmer for centuries, with the advent of dog showing in the 19th century they finally captured the interest of German dog fanciers, who began to standardize their look and temperament for the show ring.

Standard Schnauzers were mixed with the German Black Standard Poodle, giving the Standard Schnauzer a "regal" look. In the earliest days of the show schnauzer, puppies from a single litter could be classified as either German Pinschers (short-haired puppies) or schnauzers (long-coated wire-haired puppies), dependent only on coat length. Some original coat types of the German Pinscher may have been lost during World War I, having since been brought back from different stock. The pepper-and-salt coat, that is the trademark of the Standard Schnauzer breed in North America, could be seen in the German Pincher (called the silberpinsch), attesting to the close relationship between the two breeds in modern times. It was also in the late 19th century that the medium-sized schnauzer was developed into three different breeds/sizes: the Miniature, the Standard (the original), and the Giant.

Speaking on the more distant origins of the breed, writers from the late 19th century proposed that the grey Wolfspitz and black German poodles contributed to the early development of the schnauzer, though this has yet to be confirmed through genetic work.

The three schnauzer breeds take their name from one of their kind, a medium-sized show dog named "Schnauzer", who won at the 1879 Hanover Show in Germany. The word Schnauzer (from the German word for 'snout', recalling the long hair on the muzzle) appeared for the first time in 1842 when used as a synonym for the Wire-haired Pinscher (the name under which the breed first competed at dog shows). The schnauzer was first imported into the United States in the early 1900s.

In modern history, the Standard Schnauzer has taken on a variety of roles. The Red Cross used the dogs for guard duty during World War I. Both German and (in one documented instance) American police departments have put the dogs to work as well. Several Standard Schnauzers have been used in the USA for drug and bomb detection, and also as search-and-rescue dogs.

The current Standard Schnauzer excels at obedience, agility, tracking, herding, therapy work and, in Germany, schutzhund. Despite being a popular pet in Europe, the Standard Schnauzer has never gained wide popularity in North America. For the past 20 years, the American Kennel Club has registered only ~540 Standard Schnauzer puppies a year (compared with ~100,000 Labrador Retriever puppies each year).

The Standard Schnauzer is a robust, heavy-set dog, sturdily built with good muscle and plenty of bone; square-built in proportion of body length to height. His rugged build and dense harsh coat are accentuated by the hallmark of the breed, the arched eyebrows and the bristly mustache and whiskers.

The two major hereditary within the breed are: hip dysplasia and hereditary eye disease. Both problems can be tested for and identified in breeding stock before they pass the trait onto the next generation, so the Standard Schnauzer Club of America recommends that every kennel test their breeding stock for hip and eye problems before breeding and to breed only healthy animals.

However, it is entirely up to breeders whether they choose to health test their animals and whether they choose use animals for breeding despite knowing they have tested positive for carrying a genetic disease. The SSCA also encourages all potential buyers to ask their breeder for up to date OFA and CERF certifications of the parent dogs before buying a puppy.

The personality of the Standard Schnauzer can vary from dog to dog. Some are high strung, some are laid back and easy going, some don't like new people, others love anybody and everybody. The key to raising a happy and well-adjusted Standard Schnauzer lies in commitment to exercise and training from an early age. Properly trained Schnauzers make excellent family pets – reliable with children, properly mannered with strangers, respectful of boundaries. Improperly trained and exercised Schnauzers can be much more challenging. Experienced dog owners describe Standard Schnauzers as loyal, loving companions who bring them nothing but laughter and joy. They can be quite clownish and if silly behavior gets them a laugh and some attention, they'll pick up on that and become show-boaters. With Schnauzers, more so than other breeds, you get out of them what you put into them.

For people who aren't prepared to walk several times a day, the Schnauzer is not the right choice. For active people, he makes an excellent companion, as his daily activity requirements are moderate to high. Walking, or jogging are good ways to keep Schnauzers physically fit, and enrolling them in agility training can keep their minds sharp. Proper exercise not only keeps Standard Schnauzers physically fit, but it also helps maintain a steady temperament. High-strung Schnauzers are probably not getting enough exercise. It is important to keep your Schnauzer's mind active, as well. They are intelligent dogs who bore easily, and when bored, they can become destructive. Agility or advanced obedience creates “thinking time” as well as extra bonding time with family.

Training a Schnauzer varies from individual dog to individual dog. Training should be begin as early as possible, and should be conducted with firm leadership, 100% consistency, and a lot of delicious treats. Schnauzers generally won't accept a wishy-washy trainer as a leader. Once basic obedience is mastered, Schnauzers should be graduated on to advanced classes and if possible, enrolled in agility activities where they almost always excel. Schnauzers need more socialization than a lot of other breeds. They can be timid or shy around strangers, and this can often lead to snapping or biting. It is important to teach a Schnauzer early and often that new people can be trusted and new situations are nothing to fear.

Animal aggression is a common trait among Standard Schnauzers. Cats and small dogs should be kept away, as Schnauzers are prone to chase. They are best for one-pet homes, and their same-sex aggressive tendencies are high. Schnauzers should always be kept in a fenced yard and when out walking or jogging, should be leashed at all times. Proper socialization helps, but it's difficult to train aggression out of this breed, even if they are generally an even-tempered individual. Destructive tendencies are also very common with Schnauzers, but this trait is also avoidable. A well-exercised Scnhauzer is a reliable housemate. A bored Schnauzer will destroy a home in record time.

Standard Schnauzers require regular grooming every five to eight weeks. Many owners prefer to use the services of a professional groomer, as properly clipping a Schnauzer can be tricky. Show dogs need to be hand-stripped, which is a time consuming process, and is unnecessary for dogs who will not be shown. It is important to brush a Schnauzer two to three times per week to prevent mats, though the beard may need grooming on a daily basis. Check the Standard Schnauzer's ears on a regular basis for signs of wax buildup, irritation or infection. Clean the ears with a cotton ball and a veterinarian-approved cleanser; never use a cotton swab in a dog's ear canal. Teeth should be brushed on a weekly basis to prevent tartar buildup, promote gum health and keep bad breath at bay. Trim nails monthly if the dog does not wear the toenails down naturally outdoors.