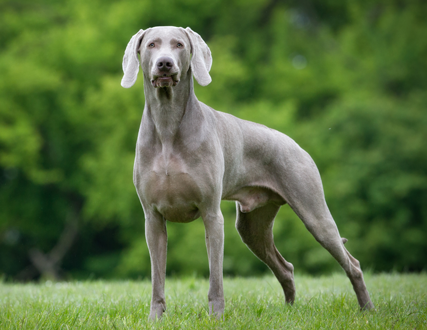 Today's breed standards are alleged to have developed in the late 18th and early 19th centuries. However, Chien-gris dogs, having very similar features to the Weimaraner, have been traced as far back as the 13th century in the court of Louis IX of France, during which most aristocrats owned one and used them for hunting. One theory is that the ancestor is the St. Hubert Hound (also known as the Bloodhound and Sleuth Hound). Though these dogs are black and tan, they can produce a grey dog when bred. Like the Vizsla at the time, the breed was created exclusively for the nobility. The aim was to create a noble-looking, reliable gun dog. With its restricted ownership and natural instinct, the breed was highly prized and lived with the family. This was unusual since during this period hunting dogs were kept in kennels in packs. This has resulted in a dog that needs to be near humans and that quickly deteriorates when kenneled. The Weimaraner was an all-purpose family dog, capable of guarding the home, hunting with the family and, of course, being loving and loyal towards children.

Originally, Germany was possessive of its skilled all-purpose gun dog. Some of the earliest Weimaraners, prior to being sent to America for breeding, were sterilized in order for America not to popularize their special breed. But starting in the late 19th century the breed became increasingly common throughout Europe and the United States. Although slower than many other gun dogs, such as pointers, the Weimaraner is thorough, which made it a welcome addition to the sportsman's household. The breed's happy, lively temperament has endeared it to families. With the rise in popularity, some changes have been made to the breed. Both in Britain and America (where the breed remains popular) breeders have taken care to breed to a standard.

Weimaraner is a large-sized gray dog, with fine aristocratic features. He should present a picture of grace, speed, stamina, alertness and balance. Above all, the dog's conformation must indicate the ability to work with great speed and endurance in the field.

According to the Orthopedic Foundation for Animals, Weimaraners enjoy low rates of dysplasia. The breed is ranked 102nd of 153 total breeds and has a very high test rate and a very high percentage of excellent rating among those dogs tested. It is generally recommended to acquire Weimaraners only from breeders who have their dogs' hips tested using OFA or PennHIP methods.

As a deep-chested dog, the Weimaraner is prone to bloat or gastric torsion, a very serious condition that can cause painful and rapid death when left untreated. It occurs when the stomach twists itself, thereby pinching off blood vessels and the routes of food traveling in or out. Symptoms include signs of general distress, discomfort, no bowel movement or sounds and a swollen stomach. Immediate medical attention is imperative when bloat occurs and surgery is the only option if it is caught early enough.

One way to help prevent bloat is to spread out the Weimaraner's feedings to at least twice daily and to avoid any vigorous exercise an hour before or after meals. It is also recommended that the dog's feeding dish not be placed on a raised platform to discourage it from gobbling its food too quickly and keep air from entering the stomach. Raised food bowls have been found to more than double the risk of bloat in large dogs. Skin allergies can affect some dogs. A vet should be consulted if a dog starts to lose hair, itch constantly or develop rashes. Parasites can cause an allergic reaction in addition to the normal irritation resulting from bites.

Other health issues include:

Weimaraners are highly athletic dogs with a lot of energy who bring an air of elegance wherever they go. They have been made popular in recent years by William Wegman, who photographs Weimaraners in costumes and wigs, acting out scenes as if they were human. This breed is not for just anyone, no matter how cute and expressive their faces may be. Weimaraners are demanding dogs who require strong leadership and a lot of exercise in order to maintain an even temperament. They are reliable hunting dogs and many people still use them in the field for both tracking and retrieving. Though they are active and require a lot of outdoor time, Weimaraners expect to live indoors with the family and soak up as much affection as they can get. For outdoor oriented families who have experience with dogs, the Weimaraner can be an excellent companion.

Couch potatoes look elsewhere - Weimaraners need at least one hour of vigorous exercise every day, but two is ideal. They are versatile dogs who enjoy walking, jogging, hiking and accompanying you on bike rides. Weimaraners don't always know how to swim, but once he learns he also enjoys a nice refreshing dip once in a while. Do not leave your Weimaraner in the back yard to entertain himself as he will probably destroy your yard and then try to escape. Novice dog owners can get into trouble with Weimaraners as they can be quite a handful. The biggest reasons that these dogs become rowdy, hyper and destructive is lack of exercise. If your adult Weimaraner is out of control at home, it is most likely because he is not being allowed to burn off enough of his extra energy. Committing to a Weimaraner means committing to an active lifestyle.

Weimaraners can be a handful to train. They are stubborn and mischievous and have no trouble walking away from you if they are bored with the activity. Start your dog off young to establish leadership quickly – if you don't let him know you are in charge, he will naturally assume the position of leader. Training should involve a lot of praise and treats, but should be conducted with a confident air. Harsh discipline will cause your Weimaraner to disregard you completely, so make sure training is conducted by the most patient person in the home, as these dogs can test the patience of a saint. Novice dog owners may wish to consult a professional dog trainer who understand the nuances of the Weimaraner personality.

Weimaraners will chase anything that moves, and small neighborhood animals could be in peril in the presence of this breed. Keep your Weimaraner on a leash at all times and make sure your yard is securely fenced. It is best that you not introduce non-canine pets into a Weimaraner's home. They get along well with other dogs, when raised alongside them from puppyhood, but can be unaccepted of new dogs into the home, especially males. As puppies Weimaraners are incredibly rambunctious and will bound clumsily all throughout the house, knocking down furniture and people. Without proper exercise and training, your adult Weimaraner will not outgrow this behavior.

The Weimaraner is a no-fuss breed when it comes to grooming. The coat is naturally dirt repellant and weekly brushing will keep the coat and skin healthy. They shed year round, but regular brushing keeps loose hair under control. Wiping the coat with a chamois will make it shine. Bathe as needed. Check the ears on a weekly basis for signs of infection, irritation, or wax build up. This is especially important because Weimaraner's pendant ears don't allow for proper air circulation, making them especially prone to ear infections. Cleanse regularly with a veterinarian-approved cleanser and cotton ball. Brush the teeth at least once per week to prevent tartar buildup and fight gum disease. Additionally, nails should be trimmed once per month if the dog does not wear the toenails down naturally.