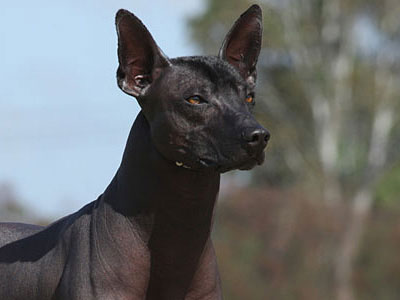 Archaeological evidence has been found in the tombs of the Colima, Mayan, Toltec, Zapotec, and Aztec Native Americans dating the breed to over 3500 years ago. Long regarded as guardians and protectors, the indigenous peoples believed that the Xolo would safeguard the home from evil spirits as well as intruders. In ancient times the Xolos were often sacrificed and then buried with their owners to act as guide to the soul on its journey to the underworld. These dogs were considered a great delicacy, and were consumed for sacrificial ceremonies–including marriages and funerals. Most likely, early forerunners of the Xolo originated as spontaneous hairless mutations of indigenous American dogs. Hairlessness may have offered a survival advantage in tropical regions. Indigenous peoples of Mexico had Xolo dogs as home and hunting companions, and today they are still very popular companion dogs. They are also the national dog of Mexico. Their value in ancient native cultures is evidenced by their frequent appearance in art and artifacts.

Xolos were considered sacred dogs by the Aztecs, Toltecs, Maya, and other groups. They were also useful companion animals. According to Aztec mythology, the god Xolotl made the Xoloitzcuintli from a sliver of the Bone of Life from which all mankind was made. Xolotl gave this gift to Man with the instruction to guard it with his life and in exchange it would guide Man through the dangers of Mictlan, the world of Death, toward the Evening Star in the Heavens. Some people in Mexico continue to believe this breed has healing qualities. The Aztecs also raised the breed for their meat. Sixteenth-century Spanish accounts tell of large numbers of dogs being served at banquets. Aztec Merchant feasts could have 80–100 turkeys and 20–40 dogs served as food. When these two meats were served in the same dish, the dog meat was at the bottom of the dish, either because it was held in higher regard or because it was increasingly considered a step above cannibalism.

The Aztecs consumed few domesticated animals like Xolos or turkey. Over 90% of the bones found at archeological sites are of deer that were hunted. When Christopher Columbus arrived in the Caribbean in 1492, his journal entries noted the presence of strange hairless dogs. Subsequently, Xolos were transported back to Europe. The breed is not well known in the United States. As a result, the Xolo has been mistaken for the mythical Chupacabras of Mexico. The Xoloitzcuintle is the symbol of Club Tijuana, a Mexican professional football club.

The Xoloitzcuintli (Xolo) is an ancient, natural breed, molded by evolution rather than selective breeding. A Xolo is moderate in all aspects of type and conformation, never extreme or overdone. Today the breed serves as a guard and companion. The Xolo possesses a clean, graceful outline, equally combining elegance and strength. There are two varieties, hairless and coated, identical except for coat and dentition. In the hairless variety, the principal characteristic is the total or almost total absence of hair. The coated variety is covered by a short, flat coat. In conformation, all three sizes are lean, sturdy, well muscled with a spacious rib-cage, and moderate bone. The Xolo outline is rectangular, and the distance from the elbow to ground is equal to, or slightly greater than, the distance from the withers to the elbow. Typical Xoloitzcuintli temperament is calm, tranquil, aloof and attentive.

The Xoloitzcuintli has been developed by natural selection for thousands of years, and is therefore generally not prone to health and structure problems as other dog breeds more modified by human selection efforts. Xolos came from tropical climates and are not suited for outdoor life in colder temperate and northern climates; they should be considered an indoor dog breed. They need bathing, light grooming, and skin care as with other dogs of similar physical type, or acne can result. Most skin problems arise from poor breeding, neglect, or over-bathing and over-lotioning, stripping natural protections and clogging pores.

The Xoloitzcuintli, or Mexican Hairless, is an elegant, active, people-loving breed. They are naturally protective and can be aloof around strangers, making them excellent watchdogs but terrible guard dogs. Xolos are often called “Velcro dogs” because of they are almost always “attached” to one member of the family. Seldom to Xolos run away from home. Xoloitzcuintlis are intelligent and emotionally tuned in to the people around them. They are adaptable dogs who can be just as happy in a large family as they are in a home with only one person.

The Xoloitzcuintli is an extremely active and intelligent breed and they require a lot of physical and mental stimulation in order to stave off boredom. A bored Xolo can get into a lot of mischief. Novice dog owners often make the mistake of not walking their Xolo, especially if the dog spends a great deal of time playing outdoors. Play is a good way to release energy, but the Xoloitzcuintli has a primal need to walk, and most owners who report a Xolo with behavior issues admit to skipping walks. Xoloitzcuintlis are adaptable to homes and families of any size. They can thrive in a home with a large yard, or in a compact apartment – as long as there is a commitment to daily exercise. Xolos are adaptable and easy going and get the most enjoyment from life when they are outdoors with the people they love the most.

Xoloitzcuintlis are smart dogs, which means they catch on to training activities quickly, but they must be taught early and often. Xolos can quickly take over and control a training session, so training must be conducted with absolute consistency, and training should be made as interesting as possible to keep the dog engaged. Xolos respond the best to reward-based training whether that reward is praise or food, and they will shut down if treated with a heavy hand. All family members should take part in the training of a Xoloitzcuintli, that way the dog knows to respect all members of the household. Some owners have experienced problems trying to housetrain a Xolo. Their hairless bodies are sensitive to extreme weather conditions, so housetraining in the winter can be a challenge. Crate training usually works the best, as Xolos like to have their own personal space and will be less inclined to mess in that space.

Owners can tend to be overprotective of their Xolo because of their attachment to their favorite people. But too much coddling and treating a Xolo like a baby rather than a dog can lead to behavioral problems, or in the smaller Xolos, little dog syndrome. Xolos are not “yappy” or “snappy” dogs, but they can be bossy and pushy if not trained properly. People who work long hours may not be suited for a Xoloitzcuintli, who thrives on being around people. Xolos who are left alone all day have been known to try and climb or dig their way out of the house. Long walks and a companion pet can often reduce a Xolo’s separation anxiety. Xoloitzcuintlis requires structure and consistency in their lives and can become agitated or upset when their schedule changes abruptly. Owners who can keep a regular feeding, playing and walking schedule will get along wonderfully with a Xoloitzcuintli.

Xoloitzcuintlis are low-maintenance dogs in terms of grooming. The hairless variety should not be over-bathed or over-moisturized, because this can cause acne or other skin infections. Most owners bathe their Xolos only about once a month. A light application of moisturizing skin lotion after a bath can be helpful to keep their skin supple, but it should not be overused. Lighly-colored Xolos may need additional grooming and more frequent application of sunscreen to protect their skin from sun damage. Shedding is not a problem with the hairless variety of Xoloitzcuintlis. Even powder-puffs only shed moderately. Powder-puff Xolos require no more brushing or combing than any other moderately coated breed. Nails should be trimmed and teeth should be cared for in the same fashion as for most other breeds.