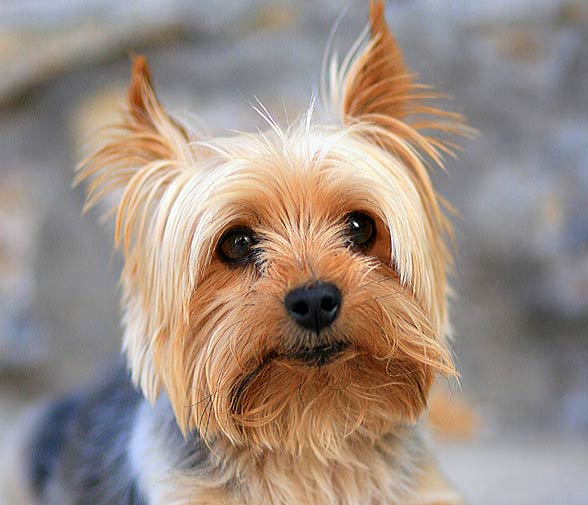 The Yorkshire Terrier (also called a "Yorkie") originated in Yorkshire (and adjoining Lancashire), a county in northern England. In the mid-19th century, workers from Scotland came to Yorkshire in search of work and brought with them several different varieties of small terriers. Breeding of the Yorkshire Terrier was "principally accomplished by the people—mostly operatives in cotton and woolen mills—in the counties of Yorkshire and Lancashire." Details are scarce. Mrs. A. Foster is quoted as saying in 1886, "If we consider that the mill operatives who originated the breed...were nearly all ignorant men, unaccustomed to imparting information for public use, we may see some reason why reliable facts have not been easily attained."

The breed comes from three different dogs, a male named Old Crab, a female named Kitty, and another female whose name is not known. The Paisley Terrier, a smaller version of the Skye Terrier that was bred for a beautiful long silky coat, also figured into the early dogs. Some authorities believed that the Maltese was used as well. "They were all originally bred from Scotch Terriers (note: meaning dogs from Scotland, not today's Scottish Terrier) and shown as such...the name Yorkshire Terrier was given to them on account of their being improved so much in Yorkshire." Yorkshire Terriers were shown in a dog show category (class) at the time called "Rough and Broken-coated, Broken-haired Scotch and Yorkshire Terriers". Hugh Dalziel, writing in 1878, says that "the classification of these dogs at shows and in the Kennel Club Stud Book is confusing and absurd" in lumping together these different types.

In the early days of the breed, "almost anything in the shape of a Terrier having a long coat with blue on the body and fawn or silver coloured head and legs, with tail docked and ears trimmed, was received and admired as a Yorkshire Terrier". But in the late 1860s, a popular Paisley type Yorkshire Terrier show dog named Huddersfield Ben, owned by a woman living in Yorkshire, Mary Ann Foster, was seen at dog shows throughout Great Britain, and defined the breed type for the Yorkshire Terrier.

That of a long-haired toy terrier whose blue and tan coat is parted on the face and from the base of the skull to the end of the tail and hangs evenly and quite straight down each side of body. The body is neat, compact and well proportioned. The dog's high head carriage and confident manner should give the appearance of vigor and self-importance.

Health issues often seen in the Yorkshire Terrier include bronchitis, lymphangiectasia, portosystemic shunt, cataracts, and keratitis sicca. Additionally, Yorkies often have a delicate digestive system, with vomiting or diarrhea resulting from consumption of foods outside of a regular diet. The relatively small size of the Yorkshire Terrier means that it usually has a poor tolerance for anesthesia. Additionally, a toy dog such as the Yorkie is more likely to be injured by falls, other dogs and owner clumsiness. Injection reactions (inflammation or hair loss at the site of an injection) can occur. In addition allergies can cause skin to be dry, itchy and/or red.

Certain genetic disorders can be found in Yorkshire Terriers, including distichiasis, hydrocephalus, hypoplasia of dens, Legg–Calvé–Perthes syndrome, luxating patella, portosystemic shunt, retinal dysplasia, tracheal collapse, and bladder stones. The following are among the most common congenital defects that affect Yorkie's.

Distichiae, eyelashes arising from an abnormal spot (usually the duct of the meibomian gland at the edge of the eyelid), are often found in Yorkies. Distichiae can irritate the eye and cause tearing, squinting, inflammation, corneal abrasions or corneal ulcers, and scarring. Treatment options may include manual removal, electrolysis, or surgery.

Hypoplasia of dens is a non-formation of the pivot point of the second cervical vertebra, which leads to spinal cord damage. Onset of the condition may occur at any age, producing signs ranging from neck pain to quadriplegia.

Legg–Calvé–Perthes syndrome, which causes the top of the femur (thigh bone) to degenerate, occurs in Yorkies in certain lines. The condition appears to result from insufficient circulation to the area around the hip joint. As the blood supply is reduced, the bone in the head of the femur collapses and dies and the cartilage coating around it becomes cracked and deformed. Usually the disease appears when the Yorkie is young (between five and eight months of age); signs are pain, limping, or lameness. The standard treatment is surgery to remove the affected part of the bone. Following surgery, muscles hold the femur in place and fibrous tissue forms in the area of removal to prevent bone rubbing on bone. Although the affected leg will be slightly shorter than prior to surgery, the Yorkie may regain almost normal use.

Luxating patellas (slipping kneecaps) are another common defect considered to be genetic in Yorkies, although it may also be caused by an accidental fall. Weak ligaments and tendons in the knee or malformed (too shallow) patellar grooves, allow the patella to slip out of its groove sideways. This causes the leg to 'lock up' with the foot held off the ground. A dog with this problem may experience frequent pain and lameness or may be bothered by it only on occasion. Over time, the patellar ridges can become worn down, making the groove even more shallow and causing the dog to become increasingly lame. Surgery is the main treatment option available for luxating patellas, although it is not necessary for every dog with the condition. The severity of luxating patellas are on a scale of 1-4, with 4 being the most severe. Many dogs will not develop past a stage 1 or 2.

Portosystemic shunt, a congenital malformation of the portal vein (which brings blood to the liver for cleansing), is also common in Yorkies. In this condition some of the dog's blood bypasses the liver and the "dirty" blood goes on to poison the heart, brain, lungs, and other organs with toxins. A Yorkie with this condition might exhibit a wide variety of symptoms, such as small stature, poor appetite, weak muscle development, decreased ability to learn, inferior coordination, occasional vomiting and diarrhea, behavioral abnormalities, seizures (especially after a meal), and blindness, which could lead to a coma and death. Often, the shunt can be treated with surgery.

Tracheal collapse, caused by a progressive weakening of the walls of the trachea, occurs in many toy breeds, especially very tiny Yorkies. As a result of genetics, the walls of the trachea can be flaccid, a condition that becomes more severe with age. Cushing's syndrome, a disorder that causes production of excess steroid hormone by the adrenal glands, can also weaken cartilage and lead to tracheal collapse. There is a possibility that physical strain on the neck might cause or contribute to trachea collapse. Since this is usually caused by an energetic Yorkie pulling against his collar, many veterinarians recommend use of a harness for leashed walks. An occasional "goose honking" cough, especially on exertion or excitement, is usually the first sign of this condition. Over time, the cough may become almost constant in the Yorkie's later life. Breathing through the obstruction of a collapsed (or partially collapsed) trachea for many years can result in complications, including chronic lung disease. The coughing can be countered with cough suppressants and bronchodilators. If the collapse is advanced and unresponsive to medication, sometimes surgery can repair the trachea.

The personalities of individual Yorkshire Terriers depends a lot upon how they are raised. Some are more spirited and plucky like a terrier, while others are delicate divas who require the royal treatment at all times. Yorkies are what usually comes to mind when someone says, “Purse Dog,” as well-to-do ladies have enjoyed carrying their Yorkie friends around in their handbags or under their arms for hundreds of years. These little dogs soak up attention and do not like to be left without companionship – even if your are only traveling to the kitchen. Owners say their Yorkies follow them from room to room like little shadows. They are excellent companions for the elderly who have the time to focus all of their energy on their dog, but can be just as happy in families of all sizes.

Yorkies do not require a lot of vigorous activity in order to remain healthy and happy. A daily stroll around the neighborhood an d some time to play every day will meet their requirements for exercise. Yorkies should always be kept on a leash or in a fenced yard when outdoors. They are scrappy little dogs who won't hesitate to pick fights with other dogs – no matter how large the dog may be – and they have a tendency to chase things. The size of a Yorkie is very appealing to people who live in apartments and condos, and these dogs will do just fine in any sized home. All they require to thrive in life is food, water, moderate exercise and all the attention you can shower ton them.

Yorkies are moderately easy to train. They are terriers, and that means they have a stubborn, independent streak. Begin training early when your puppy is amenable to the process, and always conduct sessions with lots of praise and treats. Keep the sessions short, as Yorkies bore easily and try to vary the activity as much as possible. House training a Yorkie ranges from easy to difficult, depending on the individual dog. Some Yorkies do not like the rain and will refuse to step outside when it is wet. Some just don't like to be told what to do, and others pick up on it in a matter of weeks. Puppy pads and canine litter boxes can help keep your carpet clean throughout the process. Some owners never get rid of the pads or boxes, because their Yorkies never fully give in to house breaking.

Socialization is important in the healthy development of a Yorkie. They are naturally suspicious of new people and will bark incessantly, and in some extreme cases, will snap. Over-sheltered Yorkies tend to be neurotic, so while it may be tempting to constantly shield your dog from the outside world, they need to exercise some independence in order to be mentally sound. Yorkies are yappy little dogs who can set your nerves on edge. They will bark at every little sight and sound, and are often difficult to live with in an apartment building where people are constantly coming and going. It is imperative that a Yokie learn to obey commands to stop barking. Separation Anxiety is common in Yorkshire Terriers. They get attached to the people they love and as companion dogs, believe they are fulfilling their life's duty to be in the company of people. Leaving a Yorkie alone for extended periods of time is unfair to the dog. They are better suited for retirees or families with stay at home parents than they are with people who work long hours away from home.

Soft haired Yorkshire Terriers are prone to tangles, so brushing should be a daily occurrence to prevent mats and to keep the coat clean. Silky haired Yorkies need to be brushed at least three times per week, but their hair is not as prone to tangling. Regardless of coat texture, if the dog is not being shown, there is no practical need to keep the hair long, and many owners opt to clip the coat short in order to reduce maintenance. Check the ears on a weekly basis for signs of infection, irritation, or wax build up. Cleanse regularly with a veterinarian-approved cleanser and cotton ball. Brush the teeth at least once per week to prevent tartar buildup and fight gum disease. Small dogs are prone to dental problems, especially later in life, so the more the teeth are brushed at home, the better. Additionally, nails should be trimmed once per month if the dog does not wear down the toenails naturally.